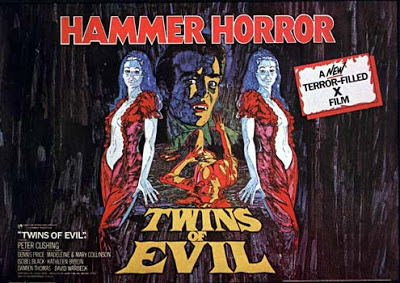 So let's say you're a B-movie producer in 1966. To sell your product you create films that are just that little bit more sexy and violent than what the big boys are doing. The problem is that various censorship laws, and the prudishness of film distributors, prevent you from going the full monty. Fast forward only a few years and the barriers have come down. Yeehaw! Now you can get busy having those starlets doff their tops and have the boys in the props department lay in an extra drum or two of fake blood. In their eagerness to exploit the new freedoms a lot of the B-movie guys forgot they were also in the storytelling business. Twins of Evil is the blood-splattered cheesecake proof of this.

Hammer Films made Twins of Evil and it marks the beginning of their slide into irrelevance and bankruptcy. In the '50s and '60s Hammer made its name with cheap and cheerful horror films that were solidly crafted, stylish, and a bit edgy. Twins of Evil is entirely about blood and boobs. There's a vague, half-assed plot about witch-hunters and vampires, but the main purpose of the film is to show off as much cleavage as possible. You wouldn't see this many low-cut tops at a convention of Las Vegas cocktail waitresses. The twins of the title were played by real life twins Mary and Madeleine Collinson, and each girl's, er, twin set is on constant display.  Really, it might have been more accurate to call the film Quadruplets of Evil.

The only plus to the cheesecake portion of the film is that Hammer actually took care to cast some attractive women. None of them could act, even slightly, but they knew how to fill out, or pop out of, a nightie. God, I wish I'd been legally eligible to see this film at the time it came out. The blood-soaked side of the film is really bad. The camera lingers pointlessly on blood geysering out of chests and necks but there's no style to it; it's all staged like a demo sequence in a special effects class. Even Peter Cushing, who plays the chief witch-hunter, seems bored with what's going on. Hammer never manged to figure out that they needed some wit and style to go along with the T & A and gore, and before the decade was over they'd disappeared like a vampire at dawn.
Posted by Cary Watson at 12:46 AM