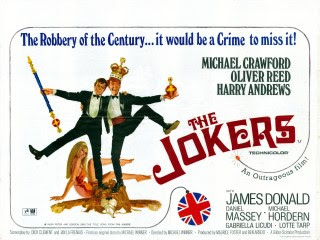 I didn't think I'd ever see this film again. It used to crop up on TV from time to time in the early 1970s, but after that it seemed to disappear completely, and a check on Amazon and eBay shows that it's not available in any kind of format. This is effectively a lost film; although I think it might also be called an unofficially banned film. Why would it be banned? Not because of violence or sex or politics, but due to the plot.

This is a heist movie about two brothers, played by Oliver Reed and Michael Crawford, who decide to steal the crown jewels just for the hell of it.  That's the steak part of the film. The sizzle portion is a dryly comic look at Swinging London. The brothers are members of the upper classes, their lives a series of balls and coming out parties and nights at champagne-soaked nightclubs. As much as the brothers enjoy their lifestyle and position, they are also apart from it; they see the pretensions and silliness of their peers and can't resist taking a poke at them. What better way to infuriate the establishment than to filch the Queen's favourite bits of jewelery? And the best part is that they intend to return the loot after one week. They're only in it for the glory, just like any other self-respecting, upper-class English amateur adventurers.

The brothers' plan to get the jewels from the Tower of London involves mounting a bombing campaign aimed at London landmarks. The bombs are real but they always give the bomb squad enough warning to get to the bombs in plenty of time. Once they've established a pattern, they put a bomb in the jewel room of the Tower and masquerade as two members of the bomb squad. The jewels are stolen, but, as is always the case in heist films, there are complications.

In 1967 a bombing campaign in central London conducted in the name of fun and social criticism seemed like an amusing plot device. The Troubles in Northern Ireland kicked off a short time later, and after that bombs didn't seem so funny anymore. And the UK wasn't the only place that bombs began to go off in: Spain, Italy and a host of other countries were soon dealing with lethal and determined bombing campaigns. That was one reason to bury The Jokers. The other reason is that the plan used in the film might actually work in the real world. I also wonder if every time the film was shown on TV it didn't give rise to a flurry of phony bomb threats. In sum, The Jokers ended up being too mischievous for its own good.

Explosives issues aside, The Jokers holds up pretty well. The story is clever, there are loads of  familiar English character actors doing great work, and Crawford and Reed make a charismatic team. Reed is especially good, and his performance is another reminder that a talent that big should never have been wasted on booze. If you want to watch this film you'll have to take the piratical download route.
Posted by Cary Watson at 11:00 AM