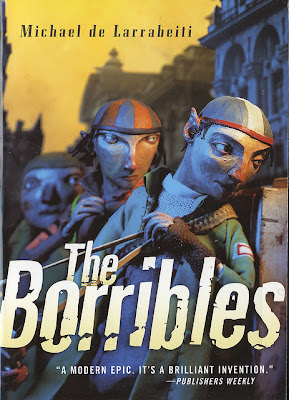 If you like your kids' lit to include a bracing dose of class warfare and anarchism, I can't recommend these two novels enough. I actually read them more than twenty years ago, but I recently found out that a third was written in 1986 (The Borribles: Across the Dark Metropolis), which, unfortunately, I haven't been able to find. And how politically feisty are these books? The third volume was held back from publication because Collins, the publisher, felt that the book's anti-police message was too strong in the aftermath of the Brixton riots in London. Pan eventually published the third volume, and all three are now available on Amazon.

Plenty of kids' books have been suppressed because they offended the religious or the squeamish, but not many that I can think of have been frowned upon for their politics. Borribles are kids who've run away from home or are otherwise deemed "unmanageable." In this urban fantasy London such children turn into Borribles. Their "wildness" takes physical form in their pointed ears, which they keep hidden lest they be spotted by the police, their sworn enemies. Borribles live in groups, stealing food and clothing, but spurning material possessions and money. They live in abandoned buildings and London's secret, empty places, and as long as their pointy ear aren't "clipped", they remain children forever. The police are always on the lookout for Borribles. When they catch one, his or her ears are clipped and they start growing up again. It's a fate worse than death for Borribles.

Just from that short synopsis you can see that for an overly sensitive and censorious parent these books offer a laundry list of objectionable elements: approval of theft; scorn for the police; a celebration of life without adults; contempt for consumerism; and an energetic dislike of street-level capitalism. The overall anarchic character of these books is what has made them suspect in the eyes of many, but it also makes them delightful to read. I read them as an adult so I can only imagine how transgressive they would seem to a kid used to earnest do-gooders like Harry Potter.

Don't be worried that the novels are distractingly political. These are adventure stores first and foremost, and Larrabeiti knows his way around a ripping yarn. The first novel has the Borribles in conflict with the Rumbles, a race of mole-like creatures who talk like members of the Drones Club (Borribles have Cockney accents) and are trying to take over Borrible territory. The second novel, as far as I can remember, continues the story and ends in a rather spectacular sequence by a river running underneath London. Sadly, Larrabeiti died in 2008. His obituary, which I've linked here, is well worth reading: his life sounds as interesting as his fiction.
Posted by Cary Watson at 1:54 PM

Email ThisBlogThis!Share to TwitterShare to FacebookShare to Pinterest
Labels: Drones Club, Harry Potter, Michael de Larrabeiti, The Borribles, The Borribles Go for Broke, The Borribles: Across the Dark Metropolis