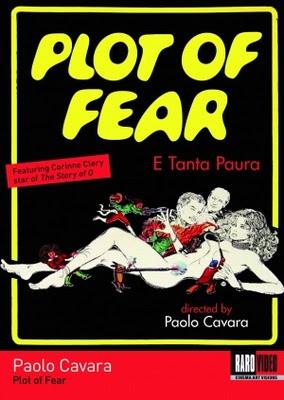 Do you have one of those co-workers who pulls you aside to tell you jokes that are so filthy you wouldn't repeat them in a Tijuana holding cell? Or maybe he likes showing you "interesting" things he's found on the Internet. And you can count on him to make the least PC comment at the worst possible time. This Italian giallo thriller is that guy. It's one hot mess of a movie, and it's so eager to be edgy and transgressive (by 1976 standards) that it's practically quivering with delight.

Giallo films are one of the sinful, sleazy delights of Italian cinema in the 1970s. Basically, a giallo film combines a murder mystery with graphic violence and sex, preferably something kinky. These films certainly served up a healthy dose of lurid entertainment, but they were also a nervous by-product of the massive changes and stresses Italian society was experiencing. In 1976 Italy was deep into the so-called "Years of Lead." Terrorist groups from the the left and right were carrying out bombings and assassinations, and many Italians were preparing for either a fascist coup or Europe's first elected Communist government. On top of all this there were the stresses of a once conservative, priest-ridden country moving rapidly in a more secular and hedonistic direction. It's no wonder so many of the Italian B-movies of that era feel like everyone involved in their production was either drunk or on amphetamines. Their corner of Europe looked set to explode or implode at any moment, and the giallo films reflect that nervous fear and energy; they're trying to be as volatile and transgressive as the society around them.

Plot of Fear ticks all the giallo boxes. It's got technicolor blood spilling out of bodies, gratuitous sex and nudity, and decadent upper-class types indulging in sex games and crimes. And like the better giallos this one actually has a plot that's cleverer than you might expect. The film starts out as a serial killer story, with the murderer leaving illustrations from a children's book beside each body. The victims were all once members of The Fauna Club, a group of animal lovers who met at a villa outside of Milan. Commissario Lomenzo heads the investigation and soon finds that the club's members were not really all that interested in animals.

But enough about the plot. It's good, but it's not the reason to watch the film. I love the look of this film: the fogs and mists filling the streets; Milan's grungy, decrepit urban architecture; the garish decor of the haute bourgeoisie homes; and all those boxy Fiats zipping around Milan, their drivers working the stick shifts like one-armed bandits as they nip past trams and trucks. And then there's the sex. To fulfill the kinky quotient we get a masochistic sex game (it ends badly), and some goings-on at the villa that include a seriously filthy cartoon and a prostitute plying her trade under a dining room table. But wait, there's more! Lomenzo is given a black girlfriend, which was pretty wild stuff for the time and place. She dumps him and he immediately takes up with a model who's connected to the Fauna Club. Of course, this being a giallo we get to see him have sex with both women, and they are two of the most awkward sex scenes you'll ever find. Nobody looks like they were enjoying themselves. And finally, we also get a whiff of politics. The film's political stance is a bit opaque (undoubtedly less so for Italians), but there seems to be an anti-fascist tone to the story.

The acting is pretty wonky. Michele Placido plays Lomenzo, and he doesn't appear at all comfortable in the role; in one fight scene I could swear he actually appears to be terrified of being hit for real by the stuntman. The others actors range from mediocre to weak,, but they make up for it by attacking their roles with gusto. They all have energy, that's for certain. Eli Wallach also has a supporting role, which isn't as strange as it sounds. He got a lot work in Europe in the '70s thanks to appearing in The Good, the Bad and the Ugly. What's odder is that Tom Skerritt turns up in an even smaller role. This was three years before he played Dallas in Alien, so how he ended up in this is anyone's guess.

There's nothing quite like a giallo. B-movies from other parts of the world were usually all about the violence or all about the sex. Only the Italians had the bright idea to throw everything in the pot along with perviness, frenzied acting, twisted plots, and some seriously demented interior decoration. Films like this aren't for everyone, but I have a mile-wide weak spot for Italian cinema from this era. Finally, if you're a regular reader of my blog, and you're an eccentric millionaire who loves to give gifts to lovers of Italian culture, I'd really, really, really like to get one of those Fiat 500s this Christmas. Just saying.

Film Review: Almost Human
Film Review: The Best of Youth
Posted by Cary Watson at 10:06 AM