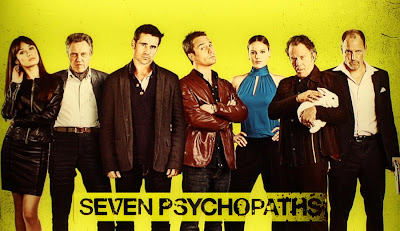 There's always a danger with rookie film directors that if their first outing is a success, they end up in a creative death spiral of trying to repeat that success. It happened to Quentin Tarantino after Jackie Brown, and it's happened to Martin McDonagh with Seven Psychopaths. His first, and previous, film was In Bruges, which was well-liked by everyone who enjoys dark, quirky, violent films. In Bruges worked because it managed to balance a solid story and excellent acting with some oddball characters and quirky, eccentric moments of violence and humour.

Seven Psychopaths gets the mix all wrong. The first danger signal is that the lead character, played by Colin Farrell, is a scriptwriter in L.A. trying to come up with a story to flesh out the title (Seven Psychopaths) he's dreamed up. With the exception of Fellini's 8 1/2, films about filmmakers struggling with creative problems don't have a great track record, and this one is one of the worst. Farrell's character has a violent title for his script but he doesn't want to write any more stories about evil men with guns doing terrible things. So off the top it looks like this film's going to be a commentary about senseless action movies. If only. Films are made to make money, so of course Seven Psychopaths quickly turns into yet another senseless action movie about evil men blowing holes in people.

McDonagh tries to paper over the ramshackle story (the plot revolves around a fatuous dognapping scheme) with bits and pieces of black comedy, but it all feels half-hearted and poorly imagined. And someone has to declare a moratorium on using Christopher Walken in dark, quirky films. He's now become a parody of himself, and directors trot him out to deliver eccentric dialogue in his own distinctively loopy style as though he's some kind of circus performer. It's like there's a formula for edgy indie films and part of it involves a triple helping of Walken to two parts ironic attitude. Sam Rockwell and Woody Harrelson take the other major roles and they don't do anything we haven't seen from them before. The worst thing about the film, however, is that McDonagh appears to think doubling down on the violence and weirdness represents creativity. The only good thing about the film is that Farrell gets to keep his Irish accent. He always seems to be less of an actor without it.
Posted by Cary Watson at 9:59 PM