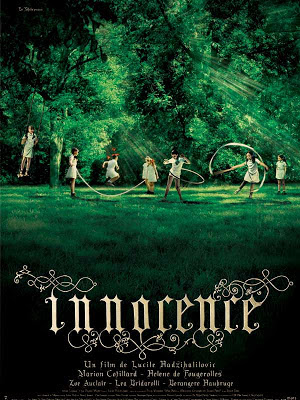 Prepare yourself to be either infuriated or fascinated by this French film. There's no in-between reaction available here.When people talk about seeing a really weird film where nothing happened and the end didn't make any sense, this is the film they're probably talking about. I'd call it fascinating, but I'm well aware that I'm probably in the minority. Try this synopsis on for size: the film begins with a young girl, Iris, arriving in a coffin at some kind of all-girls boarding school. Some other little girls open the coffin and Iris awakes to her new life at the school. The school sits in a forest that's surrounded by a high stone wall. The girls are forbidden to leave the school. A handful of teachers (one of whom is played by Marion Cotillard) educate the girls in ballet and natural history. There appear to be no other subjects. After several years at the school the girls who are just entering puberty board an underground train which takes them to...Sorry, no spoilers.

If the lack of a comprehensible story doesn't offend you, there's a lot on offer in Innocence. The director, Lucile Hadzihalilovic, is a genius at creating an atmosphere that's both charming and deeply menacing. One minute you're wowed by a beautifully composed shot of young girls playing in a river or walking down a forest path at twilight, and the next moment you're gripped by a feeling of dread that something very sick and twisted is about to be revealed. Because we're left so in the dark about the whys and wherefores of this school our imagination runs amok, and various visual nudges help us imagine all kinds of terrible things going on behind the scenes. Without using any overtly alarming cues, Innocence manages to build up a lot of tension.

This is also a film that can be enjoyed just for its technical qualities. The cinematography and art direction are superb. A lot of care and thought went into every frame of this film and the effort was well worth it. This is also goes to show that a low budget film can punch above its weight just through aesthetic excellence; lots of art and indie films can claim to have cleverer, more intelligent plots than Hollywood films, but to succeed like this purely on a visual level is perhaps even more difficult. Creating a look this beautiful, this evocative, can't be done quickly, and normally time isn't something low budget films can spare.

And now the big question: what the heck is this film about? There's no easy answer to that. Part of the pleasure of Innocence is that it throws out a dozen questions for every answer it provides. One thing does seem (relatively) clear: it's meant to be taken as an allegory about the mysteries of childhood as seen from a feminine perspective. When Iris (a six year-old?) arrives in a coffin and comes to life, as it were, I think it's meant to represent the birth of self-consciousness. What comes after that is an allegory of the uncertainties and mysteries young girls face as they move towards adolescence, and the way in which they're trained up in the roles society expects of their gender. But I'm only guessing. I recommend seeing this film with a friend. That way two things are guaranteed: you'll be entranced by the visuals and the two of you are certain to get into a testy argument over whether it was a great film or two hours of your life you'll never get back. But you can be sure that you'll probably never see another film like it.
Posted by Cary Watson at 10:15 PM