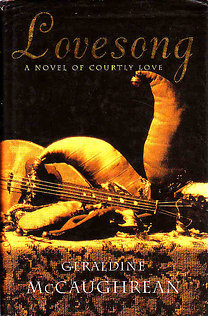 I've read four of McCaughrean's novels so far this year and at this point I'm just going to declare that she's the best living writer I can think of. Her writerly talents are, well, obscene. She can toss off more brilliant metaphors and similes on a single page than most writers can muster in an entire novel, and her storytelling imagination is fully the equal of her other skills. She's so good I actually find it a bit odd that she hasn't attracted more critical attention. One possible reason is that most of her output has been for the kids' lit and young adult market, and I think big time reviewers and critics are probably loath to take heed of someone who doesn't write for the grownups. Jealousy may also be part of the equation. I barely count as a writer, but I'm jealous that one individual should be so supremely gifted, so I can only imagine what the average professional writer thinks of a person who can apparently toss off sublime prose every time she puts her fingers on a keyboard.

Lovesong is one of a handful of adult novels McCaughrean has written. It's set in France and the Middle East during the last half of the 12th century and is described as a novel of "courtly love," which is rather like calling The Iliad a story about a package tour to Turkey. The French nobility in the 12th century was in the throes of an obsession with knight-troubadours and the formalities and demands of courtly love. As McCaughrean makes clear, it was a highly ritualized game or cult that was neither courtly nor loving. Her main characters are Amaury and Foulque, knight-troubadours; Oriole, a jongleur (a poet) in the employ of Amaury; and Ouallada, Oriole's daughter who eventually becomes a jongleuse. The story covers everything from the Crusades to tragic love affairs to mad nobles to the slaughter of the Cathars, and there are healthy helpings of violence, intrigue, sex, exotic locales, and lots of stomach-churning detail about the grimness of life in the Middle Ages.

The heart of the novel is the long and tortured relationship between Foulque and Ouallada. The sub-plots that spin off from their relationship are multitudinous, but to keep things simple just imagine Foulque as Mr Rochester and Ouallada as Jane Eyre. But don't let that comparison make you think that this novel is basically a historical romance. McCaughrean tackles some weighty themes in Lovesong, chiefly the idea that love and faith are blind. She doesn't, however, take a sentimental view of this kind of faith . Blind love and faith in this world leads to harrowing examples of violence and betrayal. McCaughrean would explore the idea of blind faith even more thoroughly in Not the End of the World (2004), a young adult book that takes a hyper-realistic look at the Noah's Ark myth. In Lovesong, religion and the informal institution of courtly love are used as pretexts for astonishing crimes; for furthering the interests of the ruling classes; and for asserting the dominance of men over women.

As excellent as Lovesong is, it does go on just a tad too long. Ouallada and Foulque get kicked in the shins by Fate and History so many times it's a wonder they can walk, and the fact that it takes Foulque forever to notice that Ouallada is in love with him defies logic. Similarly, Foulque's infatuation with Aude, a shallow but beautiful noble, really only makes sense as a plot device. Even with these minor deficiencies Lovesong is still one of the very best historical novels you'll ever find.

Book Review: Not the End of the World
Book Review: Pull Out All the Stops!
Book Review: The Death Defying Pepper Roux
Posted by Cary Watson at 11:52 PM

Email ThisBlogThis!Share to TwitterShare to FacebookShare to Pinterest
Labels: Cathars, courtly love, Geraldine McCaughrean, Lovesong, Not the End of the World, the Crusades, The Iliad