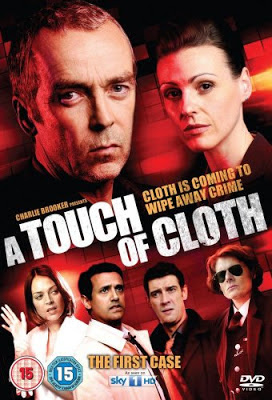 Sometimes satire, like a parasitic insect or plant, can kill its host. After Dr. Strangelove it was impossible to take a thriller about nuclear terror seriously. Testament was an early '80s film about nuclear war that positively wallowed in the horrors of life after the bomb. I saw it with some friends from film school, and after about fifteen minutes we were helpless with laughter thanks to goading each other with Strangelove references. And just try watching one of Universal's Frankenstein films from the '30s without quoting from Young Frankenstein.

A Touch of Cloth does to hard-edged Brit TV cop dramas what Mel Brooks did to Frankenstein.  Be warned that if you're a fan of shows like Prime Suspect or Waking the Dead the two half-hour episodes of A Touch of Cloth are almost certain to ruin your enjoyment of them. No longer will you be able to hear the line, "You'd better take a look at this, Guv'nor" without sniggering. Tense sessions in police interview rooms (a staple of Brit cop shows) will lose their edge as you fondly recall PC Cardboard Cutout's strong, if stiff, presence in Cloth's interview scenes. And even something as simple as seeing a TV detective holding a flashlight as he searches a dark and dangerous dwelling might bring on giggles.

A Touch of Cloth brilliantly deconstructs and ridicules every aspect of cop dramas. The writers, Charlie Brooker and Daniel Maier, have taken the Airplane/Naked Gun approach and stuffed their script with at least three gags per minute. There's nothing subtle about this satire, but the writers deserve a lot of credit for scoring such a high percentage of hits with their gags. I take that back a bit. There are some subtleties, most notably in the background gags, which are everywhere and often require the use of the pause button. My favourite might be a poster showing "Fruits Other Than Oranges." Explaining the gag would kill it, but it's brilliant, believe me.

John Hannah, who's been in at least a couple of Brit cop dramas, stars as DI Jack Cloth, and he does a fantastic job of satirizing the poker-faced gravitas of his dramatic counterparts. And you'd be amazed how many puns can be wrung out of his character's last name (that last one is courtesy of me). There's supposed to be another two-parter on the way, which is probably unfortunate because it's hard to imagine how they can come up with any new material after this thorough an evisceration. The clip below is a trailer for the show.

Hadn't heard of this, but as a fan of British cop shows, I'll have to check it out! Thanks for the heads up and the great review.

Thanks, Brent. Here's the link to the official website: