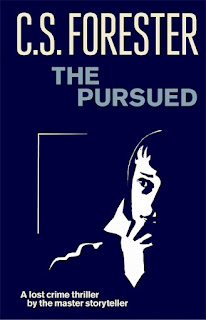 Yes, this crime novel was first published in 2011 and it is by the C.S. Forester who wrote the Hornblower novels. No, Forester is not still alive, writing his novels in some kind of cryogenic writer's den. The Pursued was written in 1935 when C.S. was already a successful author with one Hornblower novel to his credit. His publisher promptly misplaced the manuscript of The Pursued and it remained lost until 1999. I have a sneaky feeling the publisher lost it on purpose. The Pursued is not what the public would have been expecting, or comfortable with, from the author of Hornblower and The African Queen.

The story is set in suburbarn London and begins with Marjorie Grainger returning home one night to discover that her sister Dot has stuck her head in the gas oven and killed herself. Marjorie and her husband Ted were both out, seperately, visiting friends. Dot had been minding the couple's two children. The inquest reveals that Dot had been three months pregnant. Marjorie and her mother put two and two together and realize that not only was Ted the father, he's also a murderer. The suicide was faked. They can't prove any of this, but the truth is obvious. Mrs Clair decides she must kill Ted. The novel starts out on a grim note, and after that it just gets sadder and nastier.

There are several remarkable aspects to this novel, the first being its resolutely bleak tone. Forester wrote this during the Golden Age of murder mysteries, the era of Christie, Carr, Sayers, and so on, and yet this couldn't be further from their world of vicarages, amateur sleuths, and lashings of cream teas. Admittedly this isn't a mystery, but it was very much out of step with contemporary British crime and mystery writing. Neither is it hardboiled. There's little violence and the none of the characters work for or against the law. Call it suburban English noir. Contemporary readers would, I think, have been scandalized by the novel's sexual frankness and by an ending that is fairly dripping with despair. Perhaps even more shocking would be the fact that the end of the novel leaves the fates of most of its characters up in the air. The only thing we can guess is that things don't go well for them.

As I was reading The Pursued the author I kept being reminded of was George Orwell. Forester, like Orwell, has a very lean, clean, and sober prose style, but, more interestingly, in this novel he shows an Orwell-like ability to dissect and examine the world of the English middle-class. From food to sex, Forester lifts the lid on the dry, dull, mean lives that lie at the end of suburban rail lines. If this novel had been released in 1935 its most horrific element for English readers would be Forester's presentation of middle-class lives being destroyed. Forester is merciless in showing his characters suffer as their middle-class world falls to pieces. The final section of the novel gains a lot of its tension from watching Marjorie and Mrs Clair have their proper, polite lives turned to ash. If the Orwell of Coming Up for Air had decided to try his hand at crime fiction this is probably the novel he would have written.

For an author who's mostly known for producing manly novels about Napoleonic warfare on the high seas, Forester proves to be excellent writer of female characters. Marjorie and Mrs Clair are described in detail and depth, and the novel's emotional punch benefits enormously from the care Forester takes in crafting these two characters. This is not a perfect novel. The two main male characters are barely two-dimensional, and Forester doesn't always have a good ear for dialogue. Those problems aside, this is an intriguing piece of crime fiction that might make you look at C.S. Forester in a whole new light.
Posted by Cary Watson at 1:38 AM