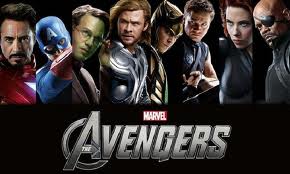 At this point in cinema history, comic book superhero films have formed their own distinct genre. This means that in the same way that James Bond films are only compared to other Bond films, comic book films can only be evaluated against their brethern. All comic book films begin with the handicap that their source material is intended for kids and teens. Some twentysomething hipsters might disagree, but the backbone of the comic industry consists of readers not old enough to vote. Given that the target audience skews young, these films are intended to be fast, noisy, violent and slick-looking, with plot usually taking a backseat and characterization reduced to the broadest of strokes. And by the standards of comic book films, The Avengers rates very high.

The main advantage this film has over others in the field is its humour. The minute a comic book film gets serious I really start to laugh. The worst in this regard are Christopher Nolan's Batman films, which struggle mightily to bring psychological depth and gravitas to a genre that's wholly unsuited for it. Superheroes are ludicrous creations, no more believable than elves or yeti. What's fun about superheroes are their powers and the bizarro villains they must face off against. Taking Batman seriously is akin to wondering why Yosemite Sam has a grudge against rabbits. The Avengers scores well in the comedy department; every bit of bombastic dialogue or over-top-action is balanced out with a one-liner or a sight gag. This saves the film from the angst-ridden pomposity of the Batman franchise, and gives us some relief from the almost non-stop action. You know humour was uppermost on the scriptwriters' minds when the villain's last line in the film is a dry witticism that might have wandered in from a Noel Coward play.

The Avengers also manages to do a good job of juggling a large cast of characters. In this kind of ensemble piece it's usually the case that several characters are shunted to the sidelines to make room for the big players, but in this film just about every character gets their fair share of screentime. Robert Downey Jr. is a stadout (no surprise) as Tony Stark, and he's matched by Mark Ruffalo as the Hulk, who underplays his Bruce Banner character against Stark's plus-sized personality. The other actors are good (watch for a Harry Dean Stanton cameo!), although Scarlett Johansson as Black Widow doesn't really cut it as an actress or as someone athletic enough to engage in martial arts. Tom Hiddleston as bad guy Loki gets this year's Alan Rickman Award, given annually to the Brit actor who best combines on-screen villainy with scene-stealing acting. Congratulations, Tom!

Like all the comic book films The Avengers is fun and forgettable entertainment, but in the world of superhero entertainment it stands as one of the best to come along in a while. And I'm sure that it'll be miles better than the next mirthless, logy Batman film.