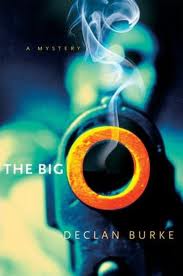 A warning: I didn't finish this book, so if you think it's unfair for someone to review a partially read book stop reading now. Still with me? Good. The Big O is a sad case of a good writer laid low by bad decisions. This crime fiction novel is, by any standards, an absolute dud. But, as I said, Burke is a good writer. His prose is crisp, quick-witted, and his dialogue can pack a punch. But he's like one of those Olympic figure skaters who look great, skate effortlessly, and then crash to the ice every time they try and do something clever.

Burke's first bad idea was to drink too deeply at the inspirational well of Elmore Leonard. Modern crime fiction has been heavily influenced by Leonard, but Burke appears to be mesmerized by the master. The standard Leonard plot has a criminal scheme at its centre, usually a swindle or complex theft, around which coalesces a variety of shady and not quite so shady characters. The players in these dramas have ulterior motives and alliances that often interfere with the course or the result of the central crime. Leonard has his characters do a kind of criminal dance of anticipation and reaction around the crime that's at the core of the story. Leonard makes the twists and turns of this dance tense and fascinating, but, most importantly, he keeps his stories moving forward at all times.

Burke has borrowed Leonard's plot structure but neglects to put his foot on the accelerator. The central crime in The Big O is the kidnapping for ransom of a plastic surgeon's wife. When I gave up on the book just past the halfway mark it was largely because the plot had barely advanced an inch. Characters are introduced, schemes discussed, and nothing happens. Burke works hard to show the unlikely links and cold-blooded alliances between the characters, but it all amounts to a lifeless schematic drawing. There's lots of talk, but nothing gets done.

Burke is so wanting to produce a Leonard he ends up draining his novel of any kind of regional flavour or identity. The story is set in Ireland, but Burke works very hard to avoid alerting us to this fact. Place names are barely mentioned, and the dialogue is pretty much stripped of any slang or nomenclature that would make us think these characters aren't from, say, Detroit. I'd call it a mid-Atlantic crime novel except that Burke leans so heavily to the west it becomes a mid-Lake St. Clair novel.

The main and minor characters come in two varieties: loathsome and not quite so loathsome. Burke has a sure, quick hand when creating a character, but here he's given us wall-to-wall shitheads. Elmore Leonard is also good at creating baddies, but he doesn't go overboard, as Burke does, in highlighting their nastiness. Leonard gives his villains positive and neutral qualities to make their negative qualities stand out all the more. Burke's characters have the asshole meter set at 11 at all times. What's worse is that Burke can't stop reminding us that they're rotten; for example, by page 50 we're very aware that Frank the plastic surgeon is a loser, a wanker, and a bastard. Unfortunately, Burke finds new and more redundant ways to tell us this over the next 100 pages. Shut up about it already!

Ray and Karen are partial exceptions to the nasty character parade. Ray is the kidnapper-for-hire and Karen is the surgeon's wife's friend. The problem with Ray and Karen is that way too much time is spent following their budding relationship. They flirt, they date, they banter, they have sex, they talk about sex, they breakup, they flirt, they talk some more about sex, and this goes on and on and on. Burke's second bad decision was to have these two in a relationship. It eats up a lot of time and it isn't the least bit interesting.

And now we come to Burke's worst idea: sex. The problem isn't descriptions of sex, which might have added a frisson of softcore fun to the proceedings, but his decision to have characters talk and think about sex more or less constantly. Burke seems to believe this is part of character-building but after a point it becomes distracting. In relation to this, there's a nasty streak of sexism in the novel. This takes the form of consistently describing women in terms of how sexually attractive or unattractive they are. Male characters aren't held up to the same standard. Early in the book a minor male character named Ferret is not described in any way, shape or form. A few pages later an even more minor female character is described as "an overweight woman with straggly hair." Ray meets another meaningless female character and spends a paragraph assessing her attractiveness, ending with the observation that "she'd want him to take her rough, like a pig snuffling truffles." Even the women get in on the act; Doyle, a female cop, is questioning a woman who's been kidnapped and threatened with rape. Her attacker also threatened to "staple her tits together" and Doyle thinks to herself that "...they'd need to be big staples. Marsha packing a pair of M&Ms in a training bra." Hilarious!

Like I said, I packed it in halfway through the novel, not too long after a R-rated Benny Hill-like scene in which Rossi, a demented thug, gets his erection caught in his zip. I wouldn't normally review a book I disliked this much, but it's frustrating to find an author who can clearly write, but who can't make an intelligent creative decision.
Posted by Cary Watson at 12:47 AM

I love that book and its follow up Crime Always Pays. Didn't get it the same way as you at all!

Seems a bit harsh, Cary. But it really makes me want to buy the book and see if I can get further than you did!
Cheers
Ruby

Paul,
My main problem was the plot; all set-up, no action.

Ruby,
Burke is definitely a good writer, and I'm going to check out Absolute Zero Cool.