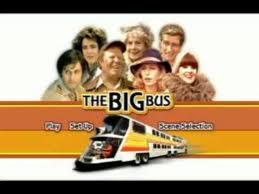 I have never understood why Airplane!, released in 1980, was so fantastically successful and managed to spawn a sequel and a sub-genre of spoof comedies such as Scary Movie and Hot Shots! That success should have gone to The Big Bus, which was out four years previously, and by any scientific criteria (well, my own) is exactly 57.6% funnier than Airplane! One can even make a case that the latter was a blatant ripoff of the former, but in the world of comedy, theft is virtually a compliment.

The Big Bus, like Airplane!, is a spoof of disaster movies. The two films take the same approach with a non-stop barrage of jokes and sight gags. The difference being that Bus scores a higher percentage of hits. One reason for this is that in Joseph Bologna and Stockard Channing Bus has two fine actors who also have razor-sharp comic timing. He plays Dan Torrance, the bus driver with a dark secret in his past, and she's Kitty Baxter, the designer of the nuclear-powered bus that will revolutionize bus travel. Their scenes together are excellent, and the work of Robert Hays and Julie Hagerty in Airplane! doesn't compare at all.

The supporting cast in Bus is very good, especially Robert Mulligan and Sally Kellerman as The Couple With Relationship Problems. Honorable mention also has to go to Murphy Dunne as the world's most annoying cocktail lounge pianist. Now, don't get me wrong, I find bits of Airplane! amusing, especially the running gag about the addictions of the Lloyd Bridges character, but The Big Bus has more than its share of comic gems and a wonderfully cheesy score by David Shire. The clip below provides a good idea of what to expect.