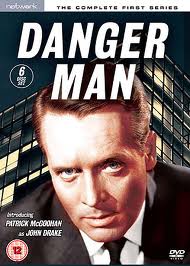 Most people are familiar with Patrick McGoohan as number 6, the title character from The Prisoner. Before that series he became a star in Danger Man (called Secret Agent in the U.S.), a British TV series that ran intermittently from 1960-68. I recently got the whole series on DVD and have been pleasantly surprised at how it stands up.

Danger Man is a spy show, with John Drake (McGoohan) travelling the globe (as created on English sound stages) to catch double agents, moles, and so on. There are several factors that keep the shows entertaining even after nearly fifty years. The first is McGoohan. He's a compelling actor with an often eccentric way of delivering lines, and he's not above hamming it up, especially when he's called upon to play "roles" while undercover. In one episode he's a very proper butler, and in another he's garrulous playboy. McGoohan does both roles with a great deal of relish.

The series is also well-written and takes a realistic, non-James Bond look at spies and spying. In fact, some episodes, notably one set in the Middle East called Fish on the Hook, feel like something John Le Carre might have written. Spying is shown to be ruthless and, on occasions, a morally dubious activity.

One thing that's largely absent from the series is sex and romance. Spy shows and movies in the '60s were as much about babes as they were microfilm and thwarting the Red Menace. Evidently McGoohan insisted on a chaste spy show (he was a staunch Catholic) and this actually works to the show's advantage. Shows such as The Saint and the The Man From U.N.C.L.E. had to devote a lot of their plot time to getting their leads involved with an interchangeable series of curvy females. It was all rather juvenile and repetitive. Because Danger Man didn't have to waste time this way, more effort is put into plotting and characterization.

Not every episode is a gem. One titled The Paper Chase is directed by McGoohan and it doesn't add anything to his CV. It moves slowly and has a number of self-indulgent directorial flourishes. All in all, Danger Man is still worth watching unless you're adamant that TV spies must come equipped with female eye candy. The clip below shows the opening credits.