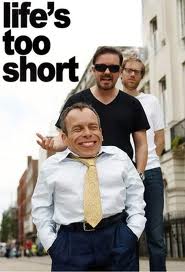 At least when Ricky Gervais and Stephen Merchant steal ideas they steal from the best...themselves. Life's Too Short is a cannibalized, hybrid, call it what you will combination of The Office and Extras. The lead character is the dwarf actor Warwick Davis, who plays himself, a semi-successful actor running a talent agency in London for little people. The actor is Warwick Davis but his character is pure, 100% David Brent from The Office. The only thing missing is the goatee. The show's entertainment industry milieu is the same as Extras, including guest appearances by A and B-list celebrities playing themselves. The whole thing's a disaster.

The feeling I got while watching this series is that Gervais and Merchant had left a lot of comic ideas on the cutting room floor, as it were, after their two previous series, and they decided to recycle them in Life's Too Short. A scene with Liam Neeson, for example, is simply a variation on Patrick Stewart's bit in Extras where he tells Gervais about his great idea for a script that features nothing but naked women. Neeson's scene is amusing, but it feels secondhand, and, like the other celebrity cameos, it's shoehorned awkwardly into the story. The same can be said for Gervais and Merchant's appearances in each episode. They're there for their brand power appeal and end up becoming a distraction. Each show has a moment or two that's amusing, but on balance it's unfunny, and at times the attempts to spin comic gold from Davis' dwarfism feel really tasteless.

If there is a saving grace in this show it's Warwick Davis. Despite having to work with leftover David Brent material, he shows that he's an excellent  comic actor. Equally good is Rosamund Hanson who plays Cheryl, Warwick's secretary. She's only required to be dim, but thanks to her odd accent and drawling voice she steals just about every scene she's in. Give this series a miss unless the sight of a dwarf falling repeatedly out of a car's front seat strikes you as insanely hilarious.
Posted by Cary Watson at 5:14 PM