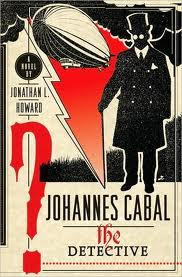 Saying that this is a steampunk novel is an almost useless definition. So many literary mash-ups fly the flag of steampunk that it should be a requirement that they come with flowcharts that explain the various influences and homages that make them up. In this case we have a story set in a mostly alternate reality Europe in which the usual eastern European countries are replaced by states called Mirkarvia, Senza, and Katamenia. The time period is, roughly speaking, Edwardian, and the technology features airships (of course) and entomopters, a dragonfly-inspired aircraft. The literary influences include Agatha Christie, H.P. Lovecraft, and boys adventure magazines like Chums. In sum, the usual DNA of a steampunk adventure.

What sets Cabal apart from the common herd of blood and thunder Victoriana steampunk fiction is that Howard clearly set out with a strong story idea before adding in the steampunk elements. And it doesn't hurt that he's a fine writer. Johannes Cabal, the Detective is the second in a series and it manages to mix together a locked room mystery with a spy action-thriller as well as a taste of supernatural horror. It's to Howard's credit that none of these elements feel forced or awkward. Other steampunk writers I've read tend to clutter up the foreground with steampunk set dressing, as it were, and leave the story behind. This novel would work well even if it wasn't set in an alternate historical reality. Really, the steampunk stuff is just a bonus.

This adventure finds Cabal, a necromancer, fleeing Mirkarvia after raising the country's king from the dead (temporarily). He flees to Senza aboard an airship under a false name and then the fun begins. One of the passengers is murdered and Cabal reluctantly takes the case. Much action and intrigue ensues, and the finale features a spectacular airship crash. As action-y as the story is, it's first and foremost a comic novel, with a comic style influenced heavily by Blackadder. Like Blackadder, Cabal is self-centred, vicious, and mostly concerned with saving his own skin. He does have a glimmer of humanity, and it's brought out by Leonie Barrow, his sidekick in this adventure who, I'm guessing, was introduced in the previous book.

There aren't many writers who can mix comedy and adventure this well, and Howard is definitely one of them. He even manages to provide a clever epilogue to the story that works beautifully as a standalone tale of supernatural horror. My only reservation about the novel is that Cabal's resolute nihilism might make him less interesting to follow in successive stories. But I'll take that chance.
Posted by Cary Watson at 2:09 PM