A Reader's Guide to Book Reviews 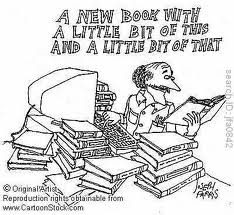 Between reading a ton of books myself, and handling several tons more thanks to working at the library, I can say with confidence that the reviews and blurbs printed on the front, back and insides of virtually all books are worthless, mendacious, misleading, written-to-order, toadying, and not worth the 14pt, bolded Impact font they're written in. Is that last sentence hyperbolic and filled with outlandish claims? Yup; just like a lot of book reviews.

I do find that blurbs and reviews can actually make me pick up a book and give it a skim, but I've also learned what kinds of reviews can be safely ignored and which are warning signs of literary crap. To begin with, there are a whole category of books that don't have any reviews. This is usually hardcore genre fiction such as Harlequin romances and novels based on video games. These books don't need reviews because their readers are the reading equivalent of crack addicts. They're happy just to get their fix.

The next rung on the review ladder is occupied by Publishers Weekly and Kirkus Reviews. They are publishing industry whores. I'm sorry, but there's no other way to describe them unless, oh, let's see, I called them publishing industry crack whores. But that would be going too far. Those two entities give positive reviews to everything. They would give a glowing review to a letter bomb: "SURPRISING!", "PACKS A PUNCH!"

Next we encounter reviews by bloggers, fanzines, and various online sites devoted to different genres or authors. These are tricky reviews to judge. On the one hand they're not tied into the publishing industry, but on the other hand they are, first and foremost, fans, and not usually critical ones. These reviewers do have an acute sense of where to place a novel within its particular genre, so if a fanzine says that an author's new work is a cross between H.P. Lovecraft and early John Updike they're probably bang on.

Now we come to reviews by other authors. This is a minefield. The most obvious problem is the quid pro quo factor; authors give generous reviews in the expectation that the favour will be returned. The giveaway that you're reading a quid pro quo review is that the reviewer will only mention the positive aspects of the novel, leading the prospective reader to imagine that the novel is without flaw. If the author/reviewer does say something negative it will be prefaced with remarks like, "one minor problem is...", "if I have a quibble with...", "the only thing that could make this novel better is...", and so on. These footling objections are inevitably tossed-off in a sentence or two in the last paragraph, usually just before one last burst of effusive praise. Some authors seem particularly prone to doling out four star reviews to other authors. The leader in this regard is Lee Child, who seems to spend his free time between counting his millions with reading other thriller/mystery writers. Lee has a good word for everyone. This brings up another point about author/reviewers. They have a fondness, I believe, for praising writers they know to be inferior to themselves. My theory is that they take a perverse glee in directing readers to books that end up making their own works look that much better. Like I said, it's a theory.

And why are authors' reviews featured on books? Film studios don't plaster their print ads with quotes from directors and scriptwriters. Did Green Lantern have blurbs from other directors? "Jean-Luc Godard says, 'Tense, gripping, capitalist filmmaking at its best!'" Godard is undoubtedly a big fan of comic book hero films, but it's interesting that studios don't bother to solicit praise from other people in the industry. The music industry is the same. Does Rhianna post fawning reviews about Lady Gaga's latest CD? Incestuous self-promotion seems to be a feature of the book world and no other.

Finally we come to reviews by major newspapers and magazines. Generally speaking they're a better guide than the others I've listed, but keep in mind that these reviewers are often authors as well so the usual warnings apply. The thing to watch out for with reviewers for the big papers is that they're often trying to make a name for themselves as masters of the perceptive, incisive, quote-worthy review. In short, they're actually more interested in how they sound to the reader rather than how well they communicate the merits of a book. Here's a reviewer from the Independent talking about David Mitchell's The Thousand Autumns of Jacob de Zoet, "“The book leaves a reader, as Ghostwritten did, in a space beyond "belief or disbelief", citizen of several worlds but tyrant or serf in none..." I'll be left in a space beyond belief or disbelief? Is that death or a coma or utter confusion? Clearly, the Independent reviewer is mostly interested in promoting himself.

The most foolproof kind of review is provided by the author in the first few pages of whatever it is he or she has written. When I used to review film scripts for a living the rule of thumb was that if a script didn't grab you by the throat within the first ten pages you should toss it aside. The same applies to novels. Read the first ten paragraphs of a book and you should get a clear idea if the author can write well and whether they have anything interesting to say. It's no coincidence that the best writers often have great openings to their novels. Here's an example from Mortal Engines, a young adult steampunk series by Philip Reeve: "It was a dark, blustery afternoon in spring, and the city of London was chasing a small mining town across the dried-out bed of the the old North Sea." Now that's a first line that grabs you by the throat and a few other places.
Posted by Cary Watson at 7:43 PM