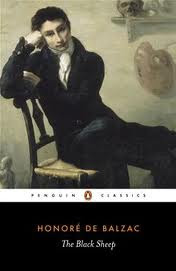 The most byzantine, Machiavellian, cold-blooded scheming by the combined brains of the CIA and MI5 against their espionage counterparts on the other side of the Iron Curtain at the height of the Cold War could not begin to equal the plotting and counter-plotting displayed by the French bourgeoisie in pursuit of an inheritance as shown in The Black Sheep. Nineteenth century French literature is full of schemers, but no one wrote about them better than Balzac, and this novel has to be regarded as the Super Bowl of backstabbing, skullduggery, and double-crosses.

The plot? OK, I'll try. Agathe Rouget has two sons, Phillipe and Joseph, the first a soldier, the second an artist. They live in Paris, but Agathe is originally from Issoudun, where her much older brother, Jean-Jacques, lives with his mistress Flore. The first third of the novel takes place in Paris where we watch the gradual disintegration of Agathe's family, totally thanks to Phillipe, who is a thief, a cad, a bounder; in short, the black sheep of the family. Agathe loves him unreservedly and virtually ignores Joseph, who is a loyal and loving son. After the family's fortunes hit rock bottom, a desperate scheme is launched to secure money, and a piece of the will, from Jean-Jacques, who is totally in thrall to Flore and her live-in boyfriend Max, who is also an ex-soldier. The balance of the novel takes place in Issoudun where Phillipe and Max, who remain total bastards, fight it out to decide who will get to exploit Jean-Jacques. That describes about 15% of the plot, and keep in mind that this novel isn't particularly long.

The Black Sheep can be enjoyed just as a fast-moving, melodramatic tale about larger than life characters, but Balzac always had more on his mind than just churning out easy-to-digest dramas. The overriding theme in this novel is the pursuit of money in all ways and for all amounts. In Balzac's world money rules everything. It defines your social status and can literally make the difference between life and death. Not so different from today, really. Balzac takes an almost malicious relish in showing how all classes of citizens will do anything to acquire wealth or an income. His true feelings about money may best be shown through the character of Joseph, who spurns money-grubbing in favour of his art. After a great many years he gets both critical acclaim and wealth. And it's no accident that Balzac has Joseph use a skull as a piggy bank. It's fascinating to note that Balzac was way ahead of today's sociologists with his criticism of lotteries: "The passion for lotteries, so universally condemned, has never been studied. No one has realized that it was the opium of poverty. The lottery was the most powerful fairy in the world; did it not nurture magical hopes?" It's interesting and logical that Karl Marx intended to write a study of Balzac after he'd finished Das Kapital. Friedrich Engels was also a fan, saying once that a single Balzac was worth many Zolas.

In 19th century literature characterization wasn't something writers left to the reader's imagination. They told you what a character was all about and that was that. Here's Balzac describing a lawyer: "...with a shrill voice, a rough complexion, implacable eyes and the face of a weasel licking the blood of chickens from his lips..." Probably a face even mother could not love. There's something satisfying about the detail an author like Balzac goes into when describing his characters. He gives us all their physical features, as well as their personality and motivations in holographic depth. None of this elliptical, non-judgemental, modern character-building for M. Balzac. Although his characters can sometimes display cliches (one actually says "do not darken my door again"), they are, at heart, very, very real.

The Black Sheep is part of Balzac's 20-volume Human Comedy series of novels, and those I've read are as enjoyable as this one, although not all are this twisty.
Posted by Cary Watson at 9:58 PM