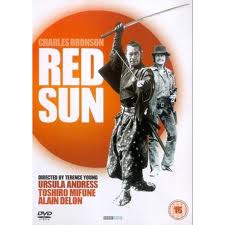 I have a high tolerance for Euro-schlock films of the 1970s, the kind that feature multinational casts in thriller/western/cop movies with a B-movie sensibility. These films weren't always cheaply made, and there was usually some A-list talent in the cast. Red Sun is a good example of this type of film. It's a western, shot, of course, in Spain, and features a United Nations of stars: Charles Bronson, Toshiro Mifune, Alain Delon and Ursula Andress. Let's see, that's respectively an American, a Japanese, a Frenchman and a Swiss sex symbol. Bronson is the only one in the movie with an accent matching the film's setting.  In 1971 all four of these actors were major stars.

The story has train robber Bronson double-crossed by Delon, who also steals a ceremonial sword in the care of Mifune. Bronson and Mifune, playing a samurai, team up to find Delon. Basically it's a lightly comic road movie with Bronson initially mocking Mifune's strange ways, but then realizing he's a "hell of a man." Along the way they fight some bandits, slaughter some Comanche, and enjoy some gratuitous nudity courtesy of Ursula Andress. The actors seem to enjoy themselves, and this film probably marks one of the last occasions on which Charles Bronson actually did some acting. Once he transitioned from Europe to the U.S.A. he became the Easter Island statue of actors.

The action scenes are fairly plentiful, albeit perfunctory, which is a bit surprising considering that Terence Young, director of three of the early Bond films, was in charge of things. The most dated part of the film is its treatment of Indians. By this stage in Hollywood Indians were the beneficiaries of revisionist history and were presented in a sympathetic light, or at least weren't treated as devils in buckskins. In Europe, however, Indians were still just colourful villains. In Red Sun the Comanche are whooping, incompetent cannon fodder for Bronson's gun and Mifune's sword. And they wear the worst native outfits I have ever seen in a western; they look like leftover Hallowe'en costumes from K-mart. So if you're hopelessly addicted to westerns or Euro-schlock or both, check it out.

I like how the film has 'Seven Samurai's Kikuchiyo and 'Magnificent Seven's equivalent of Heihachi.