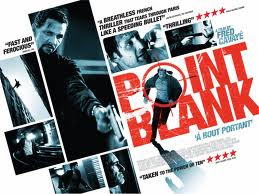 The one and only reason Hollywood buys up the remake rights to foreign films such as L'appartement, The Departed, Cell 211, Lake Mungo and this one is that they all have rock solid scripts. These are films that start with clever, original concepts and carry through with polished, smart scriptwriting. Hollywood is, in effect, buying the blueprints for success. This begs the eternal question of why filmmakers outside the U.S. seem to be so much better at coming up with original ideas for films. The answer is money.

In lieu of creativity Hollywood has money. A film such as Cowboys & Aliens uses pricey stars, expensive sfx, and wall-to-wall advertising to put bums in seats. And all that money couldn't buy a concept that was as good as most old Star Trek episodes. It's as though the studio was trying to bribe the audience to come to the cinema. Elsewhere, however, filmmakers can't sell sizzle, they have to sell steak. That means coming up with a concept and script that's so compelling it stands out from the background noise of the Hollywood hype machine. A Spanish or French filmmaker can't go to local production company with a weak idea and say that the final film will succeed if only they fork over north of $100m on stars and marketing. It's not going to happen. They need a concept that works no matter how low the budget.

And this brings me to Point Blank, a nearly flawless French thriller that wastes not a second of screen time. Without going spoiler-crazy I'll just say that it's about a hospital orderly played by Gilles Lellouche (previously seen in Chamber of Death) who is forced to remove an injured criminal from the hospital he works in. Things go badly wrong, of course, and the balance of the film's lean 84-minute running time is spent in chases, fights, hairbreadth escapes and the unraveling of a conspiracy and a coverup. In other words, everything you want in a thriller, only without big stars, over-the-top (and expensive) action sequences, and a saturation ad campaign that gives away all the best bits.

Gilles Lellouche is excellent as the orderly who finds himself running for his life. The script doesn't have him be unbelievably resourceful or tough, just desperate and determined. Roschdy Zem, France's go-to tough guy actor, plays the injured and hunted criminal and he brings a lot of presence to the role. The only problem I have with the film is the title. Why confuse your film with a 1960s classic? That's the only unoriginal idea in the whole film.