Film Review: Detective Dee and the Mystery of the Phantom Flame (2011) 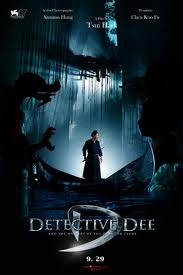 Martial arts films used to be cheap and cheerful affairs. All you needed in terms of sets were a tavern with lots of breakable furniture, a couple of  kung fu schools with nicely proportioned courtyards suitable for mass brawls, and a few streets filled with hawkers standing behind easily upsettable carts and stalls. Add in some stroppy and arrogant kung fu masters, an evil warlord, and a recent graduate of Shaolin Temple and you were good to go. Not anymore.

Kung fu films have become Asia's answer to Hollywood's toga epics of the 1950s and '60s. Today's martial arts film features thousands of extras, elaborate costumes, and lots and lots of CGI to recreate China through the ages. Crouching Tiger, Hidden Dragon can be credited with starting the trend, and since then we've had Legend of the Black Scorpion, House of Flying Daggers, Musa the Warrior, Seven Swords, The Warlords and a whole bunch more of the same.

Detective Dee has the costumes, extras and CGI, but it also doubles down on the craziness.  Dee is some kind of martial arts wizard/judge/detective who's tasked with finding out why important court officials are suddenly bursting into flame. It looks like magic but it isn't. Dee learns that there's a plot afoot to kill the Dowager Empress Wu, who is poised to become China's first female emperor. Dee saves the day and solves the mystery after battling all manner of kung fu baddies. Along the way he visits an underground city to fight a semi-mechanical man; takes on a herd of ninja deer; and generally defies the laws of gravity and physics as he kicks all kinds of ass.

A fair number of kung fu films from the '70s featured this kind of zaniness, the best being Master of the Flying Guillotine, which, as titles go, is a 100% accurate description of the contents therein. It also featured a Hindu kung fu warrior with extendable arms. I'm serious. The point being that Detective Dee has a lot of the same silliness but now it's being done with a budget in the millions. It's quite enjoyable even if it can't quite match the lunacy of Flying Guillotine. Both trailers are below for comparison purposes.