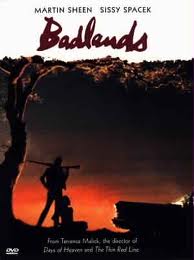 This is the one that set the template for films about sociopathic loners going on bullet-riddled road trips. Badlands spawned a flock of B-movie clones, as well as Natural Born Killers and True Romance. The last film amounted to a homage to Badlands, right down to re-using the original's signature musical theme, Gassenhauer by Carl Orff. The story is loosely based on the real-life killing spree by Charles Starkweather (how could he not be a killer with a name like that?) and his girlfriend Caril Fugate in the 1950s. Martin Sheen plays Kit, a loner who starts courting Holly, a 14-year old girl living with her father in small town South Dakota. Her father forbids the relationship and Kit kills him. He and Holly then camp out in the woods before driving across the Dakotas and Montana, evading pursuers and killing those who get in their way. They're finally caught in Montana and taken back to South Dakota.

This was director Terrence Malick's debut film and it was a groundbreaker in almost every way. One of the most notable aspects of the film is its non-judgemental tone. Malick's script and direction doesn't work to demonize Kit, instead he makes the film's tone match Kit's detached, unemotional personality. It's as though Kit is doing the directing. Kit is distracted and fascinated by oddities, trivialities and death. When we first see him he's working on a garbage truck and is examining a dead dog with a kind of bored curiosity. As he continues the route he has a momentary interest for any old thing that crosses his path. Malick's camera mimics Kit's worldview: arbitrary shots of landscapes and objects are scattered throughout the film, mirroring Kit's unfocused, random route through life. Kit is a monster, but Malick subtly conveys the hollowness that's at his core.

Holly, played by Sissy Spacek, is Kit's equal in moral blankness. His crimes don't faze her, even her father's death leaves no impression on her, and her first sexual experience leaves her wondering what all the fuss was about. Holly provides a dear diary-like voiceover for the film, and her flat, matter-of-fact tone and observations show that she's sees herself living out the plot of a pulp romance novel, albeit one with a high body count.

Badlands is also a great-looking film. Malick has a fantastic eye for landscapes, especially the way he integrates people and moving vehicles into the wide open spaces of the prairies. If David Lean had shot a film in these locations he couldn't have done any better. I lived in that part of the world for four years and Malick captures the look and feel of it perfectly: 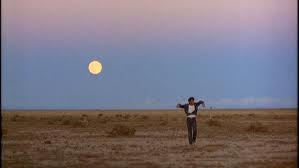 The film ends on a dream-like shot of clouds and the setting sun taken from a plane that's carrying Kit and Holly back to South Dakota to face the law. Holly's voiceover lets us know that Kit got the electric chair and she got probation. She also married the son of the lawyer who defended her. The ending's dreamy feeling suggests that that's the way Kit and Holly saw life; as a waking dream in which nothing had any value or meaning. This is absolutely one of the best films of the 1970s, although it has suffered some neglect, largely because, I'm guessing, it doesn't sensationalize its subject matter.

great review and i couldn't agree more with your assessment. He definitely portrayed the landscape the way it truly feels and that fairytale quality from the narration is a fascinating choice, which adds a whole different level. a true masterpiece!