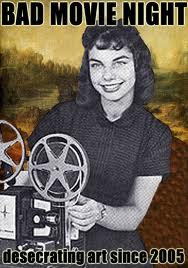 The law that states that even a blind squirrel will occasionally find a nut also says that buried within the reeking compost of bad films one can sometimes find a black truffle of cinematic excellence. And here they are:

This one starred Terence Hill, an Italian actor (real name Guido Falcone) that Hollywood tried to turn into an international star in several grisly films in the mid-1970s. Hill always looked glassy-eyed and wooden, rather like a reluctant student in an ESL class. This film has him trying to claim an inheritance in the U.S. with the help of Slim Pickens. The gem in this movie is a scene in which Pickens discovers that his beloved trailer home has been destroyed. Pickens grief is so real you'll actually feel your throat tightening.

Yes, indie film hero John Sayles wrote the screenplay, but it's still a cheapo creature feature. The best thing in Alligator is Robert Forster, who delivers an amazing performace, particularly in a throwaway scene involving a suicide bomber who walks into a police station. Quentin Tarantino gave Forster the lead in Jackie Brown 17 years later largely because of his performance in this film.

The title character is a faux god whose giant head floats over Irish hills and moors bellowing out commands to his barbaric, post-apocalyptic followers. The head is a great magical/fantastical image. The rest of the movie is completely mad and bad, starting with Sean Connery's fetish wardrobe and ending with a plot that resembles a stoner's idea for a R-rated Star Trek episode.

I realize I'm in the minority position when I call Star Wars a crap film, but I just can't get past the bad dialogue and acting (Sir Alec excepted). The opening scene, however, with Princess Leia's space ship being chased by Vader's ship still gives me a thrill. Why? Because this was the first time special effects were truly special. I can remember being in the theatre and thinking that the film world was about to change. And then Carrie Fisher opened her mouth and everything went to hell.

I can't remember much about this film except that it was a mediocre spy story set in WW I. What I do remember is the final sequence, which is a poison gas attack by the Germans against the Allied lines. This entire sequence is stunning. It's like an apocalyptic fever dream as imagined by David Lean. The highlight is the sight of the German cavalry's horses completely swathed in gas mask suits. Yes, full suits. It all looks incredibly nightmarish, and Ennio Morricone's score only makes things better.

Pterodactyls. I love pterodactyls, and this crap film has a bunch of 'em. It also has William H. Macy looking very uncomfortable as the star of an action film.

It's a toss-up which is worse: the dense, dull plot involving Vatican banking, or Sofia Coppola's acting. What's brilliant is the ending. The last scene is of Michael Corleone, who is living in hiding in Sicily, sitting by himself in the courtyard of a palazzo. He drops dead of a heart attack and the only creature to notice his passing is a dog who barks furiously at the inert body. This is an elegant and painful counterpoint to Vito Corleone's death in his own backyard in America while playing with his grandchild. Vito struggled to escape Sicily and Michael ends up back there as a fugitive. Too bad the ending isn't strong enough to rescue the rest of the film.

So much to choose from: the risible costumes (chrome suits of armour!); Nicol Williamson's performance as Widow Twankey, sorry, I mean Merlin; special effects borrowed from early Dr. Who; and set design from the people who did the It's A Small World ride at Disneyland. And yet the whole thing has a berserk, kitsch entertainment value. It's like watching a train full of clowns and wild animals crash into a building filled with paint, helium and fireworks; you don't know what's going to happen next, but it'll definitely be worth watching. And congrats to director John Boorman for putting two films (Zardoz was the other) on this list.

Even by director Michelangelo Antonioni's elliptical, opaque standards this was an unholy mess. The story, what little there is of it, is a clumsy diatribe against Western consumerism and capitalism. His first misstep was hiring two non-actors for the lead roles. The male lead, Mark Frechette, later robbed a bank and died in prison. The female lead was Daria Halprin and she suffered a worse fate when in 1972 she married Dennis Hopper. The good bit? The last five minutes of the film shows a huge house planted in the middle of the desert blowing up good, real good. Antonioni lets us see its destruction from more than a dozen angles, with lots of slo-mo, and adds in gratuitous shots of fridges, bookcases, and other things blowing up. Think of it as the art house version of Jackass.

More than 40 years after the original was made, the best innovation Hollywood could come up with was special make-up effects guru Rick Baker stuck inside a gorilla suit. It was a very nice gorilla suit, probably purchased on Rodeo Drive, but it was still just a suit. The other special effects, what little there was of them, were equally lame, and the plot and dialogue were no better than the average episode of The Love Boat. The diamond in the dross was Jeff Bridges, an actor who throughout his career has been cursed with appearing in ambitious films that fall flat on their face: TRON, Heaven's Gate, Tucker: The Man and his Dream, Starman, and even TRON: Legacy. Despite the dodgy films, Jeff is always a great actor, and in Kong he acts up a storm. When he's on the screen you can almost pretend that you're watching a good film.
Posted by Cary Watson at 3:18 PM