Book Review: Afgantsy: The Russians in Afghanistan 1979-89 (2011) by Rodric Braithwaite 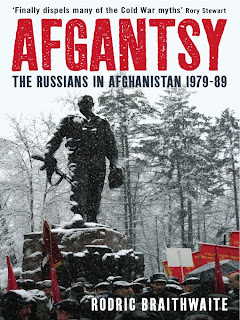 This history of the Soviet occupation of Afghanistan is valuable if only for a widely-believed myth it manages to dispell. The myth is that the Soviet invasion of Afghanistan was part of a grand strategy to expand the Soviet empire and acquire a warm weather port. Braithwaite, using interviews with ex-Politburo members and records of Politburo meetings, shows conclusively that the Soviet leaders were very reluctant to prop up Kabul's communist government. Like the Americans in Vietnam, the Soviets felt forced into propping up an ideological allyor see them swept away. Their hope was that a few years of military support and training would allow the Afghans to rule and police their own country. Sound familiar?

After only a couple of years in Afghanistan the Russians, even those at the top of the political and military food chain, were aware that they were in a no-win situation. They could control the cities and some key highways but beyond that the country belonged to the mujahedin. And year after year it became more obvious that at some point the Soviets would have to cut their losses and leave. The problem was how to do this without appearing to abandon an ally. This conundrum lead to the war dragging on for several more years, all to no purpose except to further increase casualties on all sides.

Possibly a million Afghanis were killed during the war and millions more became refugees in neighbouring countries. A lot of the deaths were the result of feuds and power struggles between the differenct ethnic, religious and politcial groups that made up the mujahedin. One of the more shocking things revealed here is how badly the Soviet Army treated its soldiers. Rations were poor, pay virtually a joke, and, worst of all, basic healthcare was shockingly bad. The army suffered from major and constant outbreaks of hepatitis and cholera, both of which were due to slipshod management of water and sanitation. Medical treatment for wounded soldiers was rapid, but the overall quality of the medical care was terrible, mostly thanks to a shortage of medical supplies. And all this was on top of the daily physical hardships and brutality of life in the Soviet Army.

Braithwaite has a fascinating story to tell, but it has to be said that he's not much of a writer. He was the British ambassador in Moscow from 1988-92, and that has certainly provided him with some excellent sources, but too often his book reads like a briefing report. If you read this book follow it up with The 9/11 Wars by Jason Burke (my review here). Burke's book covers the post-9/11 war in Afghanistan, and it's an excellent overview of a complicated and controversial subject.
Posted by Cary Watson at 12:36 AM