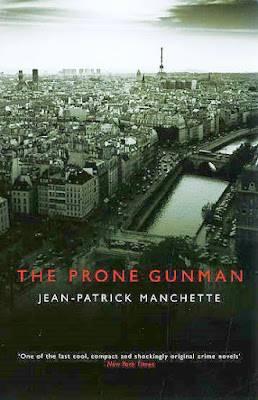 The most pleasing thing about The Prone Gunman is how thoroughly Manchette deconstructs and warps the traditional crime thriller. One way he does this is to strip his novel right down to the studs. Characters are described in a sentence or two, the plot rushes forward constantly, there's a minimum of extraneous commentary or description, and the action is brutal, frequent and described in the bluntest terms. This is a thriller with all the window dressing stripped away, and once that's done the absurdities and cliches of the genre become very apparent. A lot of pulp crime novels from the 1950s and '60s were lean and tough (Richard Stark in his Parker novels took this style to a brilliant level), but Manchette adds a dash of existential despair to the mix that makes his novels something special. The previous Manchette novel I read was Fatale (review here), and in that one the deadly heroine eventually seems to crack up under the strain of being exposed to the scheming of the bourgeoisie. In The Prone Gunman the protagonist, Martin Terrier, has a more peculiar breakdown.

The plot is a carefully thought out collection of cliches. Terrier is a professional assassin working for a shadowy company or organization that may or may not be part of the French government. Terrier decides he wants to retire from the business and goes back to his hometown in the south of France where he hopes to reconnect with his teenage sweetheart. Not surprisingly, the company Terrier works for decides it doesn't want him to retire, it wants him dead. Terrier and his girlfriend, Anne, go on the run and the bodies start to pile up along with plot twists by the score. There's really nothing original in the story, except for Terrier's reaction once the twists and betrayals reach epidemic proportions. He becomes a mute. It isn't a ruse, he actually loses the will to speak after one rather painful betrayal. It's a bizarre development, but in a loopy way it makes sense. Heroes in this genre traditionally take a tremendous amount of mental and physical abuse; they're shot at and chased; live in fear of betrayal or discovery; suffer torture; live double lives; and are always looking over their shoulder. Somehow none of this seems to have any lasting effects on the hero. At the end of the novel they pick themselves up, dust themselves off, and walk into the sunset, all ready for their next adventure. Terrier has a nervous breakdown. Who wouldn't? Terrier has been exposed to all kinds of horrors, shocks and violence, and his reaction amounts to a declaration of existential fright at what's been happening to and around him. It's a startling plot twist, but it points out the absurdity of the mentally invulnerable action hero whose psyche can bear up under any amount of pressure.

Another cliche of the crime/spy thriller genre is that the hero must have a romantic or sexual partner. If it's a wife or girlfriend she usually exists in the story to be captured or threatened and thus complicate the hero's mission. Sometimes the female characters are just around for the sex, which gives the story some sexytime fun and confirms the hero's hetero status. But the one thing that's certain is that the hero will always be paired off with an attractive, even gorgeous, woman who will think he's just great in and out of bed. It's almost an ironclad rule for the genre; no chunky or spotty girls need apply. Manchette completely destroys this cliche. Terrier eventually loses his girlfriend because, well, he's a complete dud in the sack. It's a witty riff on one of the most tired conventions of the genre.

Manchette also has time to rubbish one of the sillier aspects of crime novels: the pointless obsession with technical details; in particular, the fascination with name-branding weaponry. Any crime or thriller writer worth his salt likes (insists) on giving his readers the names and specs for every gun that appears in the story. So when a hero or villain produces a weapon we're immediately told it's, say, a Heckler & Koch MP5 with flash suppressor using a 7.62mm round. Who cares? The important thing is that some guy is armed and dangerous. For all I know Heckler & Koch could be an Austrian ventriloquism act. Manchette itemizes every bit of weaponry and extends the cliche to name-branding weapon accessories. Weapon name-branding exists in thrillers to add some verisimilitude, but it seems ludicrous to add a dollop of reality to stories that are, by and large, as far-fetched as any fantasy novel. One example: the uber-successful Jack Reader thrillers (my review of  Worth Dying For here) by Lee Child are a feast of tech specs, but the plots are relentlessly improbable.

The subversion of thriller cliches goes on right to the end of The Prone Gunman. Unlike the vast majority of thriller heroes, Terrier isn't allowed to walk off into the sunset or enjoy a warrior's noble death. He ends up brain-damaged, living in his hometown, a figure of fun for the patrons of the bar where he works as a waiter. It's the most inglorious possible finish for the hero of a thriller. At the very end we see that Terrier was nothing more than a tool, like a Heckler & Koch, used by his masters until he was broken, and then tossed away. If you have a deep love for the conventions of modern thrillers you might find this book a mite upsetting, but if you like to see literary tropes given a good kicking...enjoy.
Posted by Cary Watson at 10:26 PM

Cary,
Thanks for stopping by Pulp Curry. Yes, I am also a big fan of Manchette. I actually did think about including him in that list of crime fiction heroes, but had to draw the line sometime.
Nice reviews and nice site. Keep up the good work.
Andrew
www.pulpcurry

That last point, too, highlights the human side of Manchette's politics and the political side of his humanism. The "system" chews Terrier up and spits him out, giving him neither of the easy out of glory or death. The novel's ending is one of hte more unsettling in all of crime writing.

"Unsettling" is the perfect description. It's the ending we're least prepared for by all the conventions of the crime thriller genre.