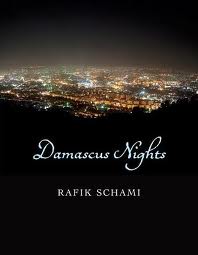 In One Thousand and One Nights, the great Arab classic of fantasy and adventure, Scheherazade tells 1,001 stories to her husband King Shahryar. The king has killed every one of his previous wives after one night of marriage. Clever Scheherazade keeps herself alive by telling the king a new story every night but leaving it unfinished by dawn. The king keeps her alive in order to hear the end of the story the next night. In this way Scheherazade keeps herself alive until the king eventually realizes the error of his ways and agrees to spare her life.

Rafik Schami takes the basic concept of this classic of Arabian literature and sets it in Damascus in 1959. Salim the Coachman, a famous storyteller who has spent most his life driving a coach between Damascus and Beirut, is visited in a dream by his good fairy. The fairy tells him that she's the one who's helped make him a great storyteller, but now she's retiring and he will lose his voice. She's asked the king fairy for a favour on Salim's behalf: if he receives seven unique gifts within three months he will regain his voice and once again be a great storyteller. Salim has seven friends who gather at his house once a week to listen to his stories. They try everything to bring back his voice, but nothing, not special food or trips away, works to return Salim's voice. Finally, the friends get the idea to take it in turns telling a story to Salim, and, after he's been told seven stories, Salim does get his voice back.

On one level this novel is a celebration of the Arab tradition of storytelling. Schami effortlessly constructs all kinds of stories, from the traditional featuring demons and fairies, to contemporary tales highlighting the character of Damascus and Syria in 1959. Schami has an amazing ability to craft story after story without repeating himself or sounding formulaic. And both his traditional and contemporary stories are equally strong. His later novels, The Dark Side of Love (review here) and The Calligrapher's Secret (review here), also demontrate this ability, but the storytelling, in both cases, is part of broader and more ambitious novels.

The political aspect of Damascus Nights is not hidden in any way. In 1959 Syria had joined with Egypt in the United Arab Republic, a short-lived attempt to create a pan-Arab nation. Not only had Syria lost its political independence, the age of the secret police and the midnight knock on the door was in full bloom. The fact that Salim and his friends get together for traditional storytelling is clearly shown to be a result of other kinds of speech having become so dangerous. For every traditional story in Damascus Nights we get another that shows the cruelty and injustice of contemporary Syria. Like Scheherazade, Salim and his friends are telling tales to stay safe; any other kind of conversation can lead to prison.

If you've never read anything by Schami before, this novel, as excellent as it is, is only a hint of the creative heights he reaches in his masterpiece The Dark Side of Love. Unfortunately, Schami, who lives in Germany, has done all of his writing in German and not enough of it has been translated into English. I'm sure, however, that when he wins the Nobel Prize for Literature translations of his other works will immediately follow. That's right, the Nobel Prize, and don't forget that it was me that said it first.

Email ThisBlogThis!Share to TwitterShare to FacebookShare to Pinterest
Labels: Damascus, Egypt, Nobel Prize for Literature, One Thousand and One Nights, Rafik Schami, Scheherazade, Syria, The Calligrapher's Secret, The Dark Side of Love