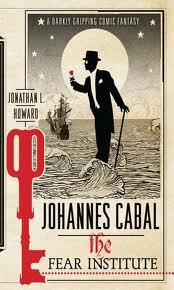 In the two previous Johannes Cabal novels (my reviews here and here) author Jonathan L. Howard tried his hand at a steampunk adventure and a tale about a demonic circus which combined elements from Terry Pratchett and M.R. James. In his latest novel Howard goes the full eldritch and worships at the unholy temple of H.P. Lovecraft. He does it brilliantly; in fact, better than H.P. ever did.

The story this time out has necromancer Cabal hired by the Fear Institute, a secret organization sworn to eliminate fear from the hearts of men. How to do this? By journeying to the Dreamlands, where dreams come to life, and slaying the Phobic Animus, the begetter of fear. The members of the Fear Institute believe a new Golden Age can be achieved if Man is no longer shackled by fear. Cabal accepts the job, and he and three members of the Institute go to the Dreamlands and, naturally enough, discover all manner of horrors and terrors. What fun!

I won't bother with plot details, but suffice to say that Howard constructs a fascinating, entertaining story that always maintains a very high level of imagination, excitement and invention. Howard is simply a great storyteller and a clever writer, and his talent would shine out in any genre, but he shines even brighter in the fantasy/horror world, a place that seems to have more than its fair share of hacks. It's also praiseworthy that Howard sets out to create a homage to Lovecraft but doesn't let that get in the way of his storytelling. When writers decide to write a homage or pastiche it's usually a way of papering over their own lack of originality. The horror/fantasy genre is stuffed with writers who've been "inspired" by Lovecraft, Pratchett and, of course, Tolkien, and they produce a lot of second-rate material. Howard succeeds in his homage because he uses Lovecraft as a flavouring rather than as the main ingredient.

The appeal of Lovecraft (1890-1937) for horror writers is understandable because he was the popularizer of a new kind of horror story. The vast majority of pre-Lovecraft horror stories were about ghosts, with the occasional werewolf or vampire thrown in for variety. Lovecraft created a literary world of cosmic terrors, hideous gods and creatures who weren't satisfied with merely killing you; they wanted to extract your soul, play with it, nibble on it, use it as a ping-pong ball, shred it into confetti, and then lather, rinse, repeat with it. Lovecraft had a feverish imagination and writing style that's entertaining in small doses. The problem with Lovecraft is that he really only knew how to write one kind of story, but at least he did it with a lot of energy and colour.

I say that Lovecraft was a popularizer because the real father of cosmic horror was William Hope Hodgson (1877-1918), an English writer who Lovecraft cited as an influence. Hodgson's life and writing career was cut short by an artillery shell during WW I, but prior to the war he produced short stories and novels that redefined what a horror story was. His finest novel is The House on the Borderland, which is virtually a template for much of Lovecraft's fiction. Hodgson also wrote some great short stories, including a whole series about Carnaki, a Sherlockian sleuth of the supernatural. Carnaki's name is ridiculous, making him sound like a  second-class magician operating on Brighton Pier, but his adventures are wonderfully strange.

The only problem I have with the Cabal books is Cabal himself. He's a more black-hearted version of Blackadder, and that's amusing up to a point, but towards the end of each novel I keep hoping/expecting there will be some change in his character. It never happens. Cabal is entertaining, but his misanthropic sarcasm has become a one-note joke after three books. More variety, please.
Posted by Cary Watson at 11:16 PM