Book Review: The Judgement of Paris (2006) by Ross King 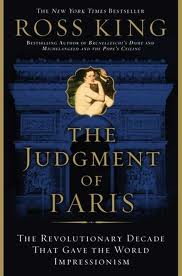 This is a history of the Paris art world from 1863-74, a decade and a bit that saw a seismic change in artistic techniques and subjects, and a slower, but significant, shift in what art critics and the public were willing to accept as art. 1863 began with the Salon des Refuses, an exhibition of the paintings rejected by the official Paris Salon. The Paris Salon was a yearly, government-run exhibiton of each year's most praiseworthy paintings and sculptures. In 1863 the Salon's judges were, as usual, chiefly interested in paintings that depicted scenes from mythology, antiquity or history (preferably French), and the style they wanted was what could be called dignified realsim. Those that didn't meet this ideal were stamped on the back with a red R (the paintings, not the artists). In protest, a large number of spurned artists demanded a room near the main salon in which their works could receive the judgement of the public. And thus the Salon des Refuses was born. They did not receive a warm reception from the public. Only eleven years later a special exhibition was held of the artists dubbed the Impressionists, and by that point it was clear that the smart money was on the new guys. Ironically, the critic who dubbed Monet, Degas, Renoir and others as "impressionists" meant the term as an insult.

With hindsight it seems mildly insane that anyone could object to anything painted by the Impressionists. The author shows that it wasn't so much the technical style of the Impressionists (although that was a contentious issue)  as it was what they painted. What the Impressionists painted was modern, ordinary life, from the mundane to the illicit. The old guard felt that the noble art of painting should only be used to deal with noble subjects. In The Social History of Art by Arnold Hauser, the author, taking a Marxist view, argued that the animosity directed towards the Impressionists was becuase they brought, as subjects, the proletariat and bourgeoisie into a field that had been dominated by images of the holy and the powerful. Adding credence to this theory is the fact that the dictatorial government of Napoleon III found these artists and their paintings suspiciously democratic. It should be pointed out that the vast crowds that viewed the works in the Salons des Refuses, including lots of proles and bourgeoisie, heaped scorn on the new wave in art.

Speaking of vast crowds, it's remarkable how popular and important art and artists were in France. Pretty much all of Paris, from the high to the low, turned out for each year's Salon showing, and their reactions to the paintings could be as vocifierous as anything you see in a sports stadium. And the critics! A harsh critique back then could begin with the critic seriously speculating on an artist's sanity and morals, and then things would get really nasty. Although the Impressionists triumphed in the end, the author points out that this was mostly thanks to deep-pocketed art collectors in America. Americans had no tradition of triumphalist, elite-worshipping art. They judged the Impressionists on their own merits.

Ross King does a great job of blending art history, art criticism, social history and political history. This is not a book with a narrow focus on artists and art. King creates a full portrait of the world the Impressionists came out of and were fighting against, and he does it with clarity and wit.
Posted by Cary Watson at 1:42 AM