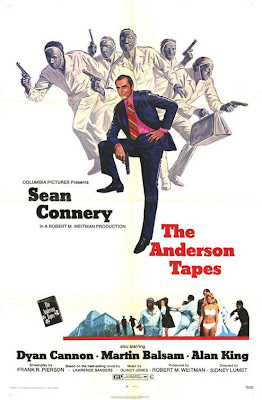 There are three directors who will be forever identified with New York City. The first two are Martin Scorsese and Woody Allen. The third, and the one with the least name recognition, is Sidney Lumet. Lumet made at least nine films set in NYC, Serpico and Dog Day Afternoon being the most famous, but, unlike Allen and Scorsese, his directorial style is decidedly unidiosyncratic. Lumet, who had a long career in TV before moving to films, had an intense focus on storytelling and he didn't let stylistic flourishes to get in the way of the plot. Lumet's New York films celebrate the city through the faces and voices he cast in his films. The accents and slang of New York fill Lumet's films in a way no other director has matched, and they help give his NYC films an edginess and freneticism that says Gotham like nothing else. He also had an exceptional talent for casting exactly the right actor for each role, right down to the most minor parts. Lumet's fine appreciation for actors also showed in his knack for finding new talent: Christopher Walken, John Cazale, Candice Bergen and Walter Matthau all got their first major roles in Lumet's films.

The Anderson Tapes came just before Serpico and Dog Day Afternoon, and it showcases a lot of Lumet's strengths. The story is about the robbery of a luxurious apartment building bordering Central Park. The leader of the gang, nicknamed Duke, is played by Sean Connery, who, fortunately, does not attempt a New York accent. He is clearly identified early on as being a "limey." Martin Balsam and Christopher Walken (in his first film role) take the other major parts. The robbery does not, of course, go according to plan; for one thing, a baker's dozen of government agencies are surreptitiously bugging most everyone Duke comes in contact with prior to the robbery . In an interesting twist, the robbery section of the film is intercut with flashforwards to the robbery's aftermath. This was pretty cool stuff for 1971, and it adds another layer of tension to the entire sequence.

Lumet's skill at casting is very evident. Every secondary and minor role (there are lots of them) is filled by skilled, experienced character actors, some by name performers like Ralph Meeker and Margaret Hamilton, and others by people who simply have great faces or voices. One example of this is the role of the getaway driver, played by Dick Anthony Williams. His voice and presence grab your attention in every one of the few scenes he's in. A few years later he scored back to back Tony nominations for Best Actor. Lumet really knew how to pick 'em.

The film is shot with Lumet's characteristically unobtrusive, semi-documentary style, and the heist is a superb synthesis of camerawork and editing. The New York locations aren't any of the usual ones, but they look great. A special mention has to go to Quincy Jones' score. It's an amazing mix of jazz/funk that sometimes transitions perfectly into some electronic sound effects that represent a key aspect of the plot. The one aspect of the film that really hits a sour note is Dyan Cannon. Never much of an actress, she provides the eye candy and romance for Connery, but their scenes together are awkward and poorly-written.

Martin Balsam's character is both problematical and significant. He plays a flamboyantly gay interior decorator and his gayness is made fun of at most every opportunity. This was amusing stuff in 1971, but today it looks pretty juvenile. On the other hand, it's important to note that neither Connery's character or the other members of the gang make fun of the Balsam character or even mention his sexuality. To them, he's simply another member of the team. This inclusiveness is striking for the time, and Lumet's sensitivity to gay characters would become even more evident in Dog Day Afternoon.

This isn't one of Lumet's very best films, but it's definitely a fun and energetic example of his directorial skills.
Posted by Cary Watson at 11:25 PM

Great review and totally agree about Lumet's casting talent. He really knew how to bring out great performances. His work with Sean Connery is particularly notable. THe Anderson Tapes is a fine film,as is "The Offence."

Thanks, Brent. I pick The Hill as the best Lumet/Connery combination. Probably Connery's best performance.