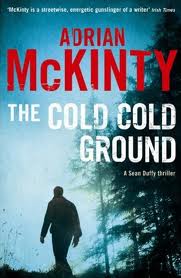 The fact that The Cold Cold Ground is, for the most part, a police procedural shouldn't be cause for comment except that no one else, as far as I know, has had the bright idea to set a procedural during the Troubles, Northern Ireland's long-running sectarian conflict. A Troubles-set procedural seems like an obvious and rich source for story ideas, so it's a bit odd that no one's done it until now. I'll take a guess that there's still so much residual animosity and bitterness about the Troubles floating around the British Isles that any attempt to fictionalize the subject guarantees a certain amount of unpleasant blowback for the author. If there is any in this case, at least the critics can't complain that the writer's not up to the job.

The novel kicks off with the discovery of a man's mutilated body in a junked car. At first it looks like yet another killing related to the Troubles, but it rapidly emerges that this might be the work of a serial killer targeting homosexuals. Detective Sean Duffy is the lead investigator and he soon finds that the IRA may be involved, and that a woman found hanged in an apparent suicide may also be part of the mystery. This all plays out against the background of Catholic Belfast reaching the boiling point as the IRA  hunger strikers in Maze Prison begin to die.

McKinty has crafted a novel that works beautifully as a procedural and as a period piece (the story's set in 1981) capturing the look and mood of a region with one foot in a civil war and the other on a banana peel. The procedural aspect of the novel is exceptional. Duffy is shown to be very much part of a team. His fellow officers aren't just there to pass on important bits of plot information at key moments, they also get to be clever, add commentary, and crack wise. Duffy clearly feels comfortable working with this group and relies on them, despite the fact that he's a Catholic in the Royal Ulster Constabulary, a predominantly Protestant organization despised by Catholics. The scenes of Duffy with his fellow cops are probably the strongest elements in the novel. The final sections of the story have Duffy becoming more of a lone wolf, and they work well in giving the story a thrillerish finale, but I found myself wishing that the procedural aspects had kept going to the end. Also, some of the players who come into the story towards the end are rather high up the political food chain, and that moves things well beyond a police procedural.  The transition is a bit jarring. That aside, the mystery at the heart of the story is satisfying and cleverly thought out.

McKinty brings the Belfast of 1981 alive with short, sharp descriptions of shattered streets, grandiose sectarian graffitti, menacing British firepower in the air and on the ground, and a populace that's always keyed up to either fight, flee or heap abuse on the police. The main reason I can believe that McKinty's descriptions are bang on is that they match up perfectly with an excellent memoir about the Troubles by Malachi O'Doherty called The Telling Year: Belfast 1972 (I'm pretty sure this was the book) that I read a few years ago. I think what McKinty captures best is the all-encompassing feeling of dread and tension that people, especially the police, lived with. Northern Ireland, as seen through Duffy's eyes, is a minefield of actual and theoretical dangers, any one which can be triggered by a wrong step, a wrong turn or a wrong word. It's an intensely dispiriting world (even the weather's crap) and McKinty makes it feel very, very real.

Sean Duffy is a strong and entertaining protagonist. He's smart, funny and believable as a cop. Far too many fictional cops moan and groan about their jobs. Duffy seems to like what he's doing and is dead keen on getting results. He's not a jaded or beaten down cop (there are far too many of those), he's not too cynical, and he's human enough to indulge in the odd bit of very petty corruption. Duffy's keenly aware that he's a fish out of water as both a university-educated policeman and as a Catholic in the RUC. The dichotomies in Duffy's life seem to find symbolic expression in an unexpected event that takes place in a public washroom. It's an odd and audacious scene that begs for some kind of follow-up, which, I suspect, will come in the next Duffy novel.

I have a minor complaint about Duffy that really qualifies as more of a pet peeve: we're forced to learn far too much about his musical tastes. Lately it seems to me that every mystery writer has to make a point of telling us what their detective likes to listen to. In the past few years I've read mysteries by Ken Bruen, Massimo Carlotto, and Gianfranco Carofiglio in which their detectives musical choices are regularly mentioned. It's a pedestrian way to build a character, and the worst part is that these Desert Island Discs moments always (for me) break down the fourth wall. I always feel I'm being buttonholed by the author for a bit of a natter about his favourite songs and artists. I blame Elmore Leonard. He introduced the idea of characters referencing their choices in music and movies, and after that the genie was out of the bottle. One of these days I'd like to see a mystery writer give us a brilliant detective with really horrible taste in music. How about a sleuth who only listens to ABBA and Slim Whitman? I shall now stable my hobby horse.

I've read four other crime novels by Adrian McKinty and The Cold Cold Ground is jostling for the number one position on my list of favourites. It has the tension, fast pace and intrigue you expect from any mystery/thriller, but it also manages to evoke a time and place that's beginning to fade into the past. And in Sean Duffy we have a character who is not only compelling, but, I'm guessing, is going to be changing in upcoming novels. One final aside: is there a more perfect example of Brit/Irish understatement than calling a low-grade civil war the Troubles? If it had been even more bloody would it have been called A Spot Of Bother?
Posted by Cary Watson at 1:01 AM

Very nice review, Cary. I was kind of with you on the racheting up of the ending, except that it turns out that the over the top character in this book was taken from life. Still, I enjoyed the exchanges between the members of the police force the most.

I guess some people don't like music and books being part of characters life, but I really don't mind that at all.

Yeah there are quite a few real people in the novel. Most dead. And one very much alive and in the witness protection programme, living in a villa around Lake Como in Northern Italy. Probably right next to Clooney.

Seana,
Yes, the byplay between the cops is really sharp and fun.

Adrian,
Still alive around Lake Como? I'm surprised the Brit tabs haven't been hounding him down.

Its surprising also that the IRA havent found him.

More on the real Stakeknife here:

Of course like 007, it could be the codename for more than 1 agent.

I suppose George Clooney isn't old enough to BE Stakeknife...

Adrian,
I read the wiki piece on Stakeknife; pretty chilling. It made me remember a book I read about the SAS's campaign against the IRA called Big Boys Rules' by Mark Urban. Both sides in that particular branch of the conflict were pretty ruthless.