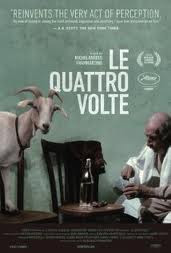 Here's the plot: an old goatherd living in rural Calabria dies and his spirit/soul/essence passes through a goat, a tree, and ends up as charcoal. Oh, and there's no dialogue. There's ambient sound, some barely audible background chatter, but no conversation. Clearly, this film isn't meant to appeal to the average filmgoer. This is an art film with a capital WTF? The film begins by following a decrepit goatherd in his daily routine. We see him take his goats to pasture, bring them back to the scruffy, hilltop village he lives in, and then go to bed in his spartan house. Just before bed each night he drinks a folk remedy of what looks suspiciously like ash. He dies and a baby goat is born. We follow its brief life until it dies under a tall pine, which is then cut down and brought to the village as part of a festival. After the festival the tree is sold to some charcoal makers and we watch the process of turning wood into charcoal. Finally, the charcoal is taken to the village and sold as cooking fuel. The end.

The Circle of Life plot isn't what's remarkable about this film. There have been meditative, non-narrative arthouse films before this one. What sets this film apart is the sheer brilliance of its cinematography. Even though there is no dialogue or obvious story to hold our interest, the images in the film have their own stories to tell that completely capture our attention. And, in their own way, the images create a dialogue by asking us to figure out what's going on. The cinematographer is Paolo Benvenuti, who does an amazing job of framing shots and using locations that hold our attention all on their own. Every shot is rich in detail and information, as well as often being beautiful or striking. The plot description makes this film sound like a bit of snooze. How compelling is it watching an old man, goats, and charcoal production? In fact, everything we see in the film has moments of drama, comedy, and pathos, only it's all told to us visually.

For comparison's sake I'd recommend a viewing of War Horse (my review here) before seeing Le Quattro Volte. War Horse is a master class in bad cinematography, and by "bad" I don't mean out of focus or any other kind of technical error. War Horse confuses prettiness with great cinematography, and it uses every cheap and expensive trick to achieve its chocolate box beauty: lens filters are used to create more magical cloudscapes, exteriors are only filmed during the golden hours of the day, only the most eye-catching locations are used, and every object within the frame, from actors to tea cups, has been vetted for attractiveness. It's cinematography by way of the Neiman-Marcus catalogue.

Le Quattro Volte does not do pretty. The village that the story takes places in sits in a dramatic, picturesque location, but the village itself is unkempt and ramshackle. The citizens of the town are clearly real people, not one of them looking remotely like a model or actor. The exterior shots are taken at all times of the day, and there are no obvious attempts to juice the look of the film through lighting or filters. The cinematographer has simply worked hard to find the best shot composition for each location. One technique he uses that makes most every shot come alive is to put vanishing points, sometines more than one, into many of the shots. A lot of this film takes place outdoors, and Benvenuti uses roads, lanes and alleyways to create vanishing points that draw us into the images and hold us there. The most masterful sequence in the film is shot in a single take, the camera positioned high above a goat pen located on the edge of the village. The scene involves a frisky dog, an Easter procession and a delivery truck, and it's an amazing combination of choreography and cinematography.

A dialogue-free film about death and resurrection clearly doesn't have mass appeal, but it's gripping from start to finish, it looks fantastic, and if your main objection to foreign films is the annoyance of reading sub-titles, no worries.
Posted by Cary Watson at 10:44 PM