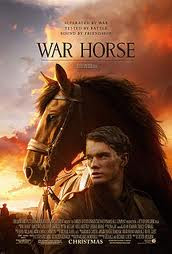 War Horse proves that it takes a big talent to make a good film, and an even bigger talent to make a flaming wreck of a film. Steven Spielberg is the culprit. It's not as though he hasn't done this before; 1941, Always, and The Terminal were all wretched, but War Horse is Spielberg at his nadir.

The story is syrupy even by Spielberg's standards. Basically, Joey the wonder horse becomes the object of affection for all who come in contact with him. He's first owned by Albert, a teenage boy living in Devon. World War One commences and the horse is requisitioned for the military, and a cavalry officer falls hard for Joey. The cavalry officer unwisely charges some German machine guns and Joey ends up in the loving hands of a German private. He then comes into the possession of a charming young French girl before being reunited at the war's end with Albert, who takes him back to England.

Yes, it's a preposterous story, but it's part of a director's job to make the preposterous seem plausible, and Spielberg doesn't make us understand why everyone gets dewy-eyed over Joey. It's true that horses have always been beloved animals (there's a whole sub-genre of kids' lit devoted to them), but this story is in such a rush to gallop Joey and his owners through one cinematic set piece after another that we're completely baffled as to why people want this beast. The longer the film goes on the more ridiculous this affection seems. Of course, on a symbolic level the horse is supposed to represent beauty, peace, and home, and while that goes part of the way to explaining his appeal to his owners, it still doesn't excuse the clumsiness with which Spielberg handles the story.

This brings up Spielberg's great weakness as a director: at heart he's a creator of showstopping moments and sequences, not a director whose focus is always on the story at hand. When he's at his worst, Spielberg's first thought is how to make a shot or a sequence look glorious, not how it's going to advance the story or develop a character. And in Spielberg's world this means every shot has to look like it was taken on Planet Sumptuous. The first section of the film is set in Devon, and in Spielberg's Devon every landscape and interior looks like it could be eaten for dessert. When it rains in this Devon it rains clotted cream. Albert's family are supposed to be poor peasant labourers but they live in a thatched cottage that's so picturesque, so tastefully furnished, you wonder if they're interior designers who've come down in the world. The chocolate box look of this film never ends. The war in France, except for a few muddy bits in the trenches, looks great. And Planet Sumptuous appears to orbit two suns, which is handy for Steven because there's always a stunning-looking dawn or sunset to light every shot. The final scene in the movie features a sunset so fiery I was wondering if one of the suns had gone supernova.

The fussy, prettified, over-produced look of War Horse even extends to the actors. Apparently, Joey can't be owned by unattractive or ordinary-looking people. At the very least he must be owned by people who've done catalogue work for J. Crew. The acting is decent, even though a lot of the actors have to fight their way through West Country accents that give rise to memories of various Monty Python sketches. And none of the actors can compete against the mouthwatering set decoration and ravishing cinematography.

So much energy has been devoted to the look of this film no one, it seems, took a hard look at the script. It's just plain, old bad. The peasantry of Devon spout rural cliches Thomas Hardy would have rolled his eyes at, and the interlude with the French girl is sweetness on steroids. The final section of the film showing Joey's return to Albert doubles down on the silliness. Battle-hardened Tommies unite to get Albert his horse back, and the only way the whole thing could feel more ridiculous and sentimental is if a song and dance number broke out.

The only reason to watch this film is to see how artistically corrupting great success can be. There's simply no one who's going to tell Spielberg that he's going too far, and the result is a film that's simply rotten with self-indulgent flourishes. There is one good thing about War Horse: every third frame of it would make an excellent wallpaper for computer monitors.
Posted by Cary Watson at 6:28 PM