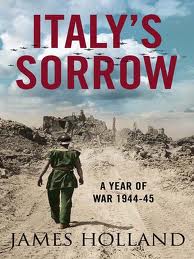 The Italian campaign has often been glossed over in histories of the Second World War. It didn't have the epic scope of the Russian Front, the strategic significance of the invasion of France or the drama of the war in the Pacific. The war as it was waged in Italy was a long, hard slog that featured no famous battles and no charismatic commanders. Italy's landscape of hills, mountains and poorly-built roads made it ideal for defense, and James Holland shows how the Allies were doomed to an arduous fight to climb up the length of Italy.

Two things stand out in this history: the first is the ferocity and frequency of German reprisals against the civilian population. Partisans in northern Italy were a serious menace for the Germans ( far more so than what they faced from the French Resistance), and they responded to partisan attacks with mass shootings of civilians, including women and children. The worst atrocities took place on the Monte Sole plateau as the Germans tried to root out the Stella Rosa partisan group. The civilian population of the area was almost entirely massacred, including over 200 women and children in a single killing in a cemetery. The second revelation is that not all atrocities were committed by the Germans. Holland reveals, in sickening detail, the wholesale rapes committed by French colonial troops from Algeria (called Goumiers) as they fought their way up Italy's spine. Their crimes went unpunished. The French film Days of Glory (2006) is about the Goumiers and turns out to have been a complete whitewash job.

James Holland is a decent writer, but he doesn't offer the wit or acute analysis that you get with Max Hastings, the current king of military historians. Holland's book would have been better with more discussion of the civil and political disorder that gripped northern Italy in the immediate aftermath of the war. He also glosses over the way the Allied forces allowed the mafia to become even more entrenched in southern Italy.