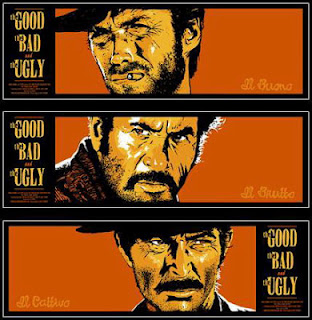 This isn't going to be a full-on review of The Good, the Bad and the Ugly; let's just take it as a given that you've seen it, you love it, and you agree that it fits into any list of the top one hundred films of all time. An aspect of GBU that hasn't had much, or any, recognition is that the plot isn't just about three men hunting for hidden gold. That's just the top layer to the story. On a symbolic level GBU is about Christ and the Devil fighting for Tuco's soul. If you've finished snorting in derision, I'll continue.

Let's begin with the naming of the characters. Only Tuco, the Ugly, is given an actual name. The Bad is called Angel Eyes, and the Good is named Blondie. The last two have been given symbolic names. Angel Eyes is a reference to Satan as a fallen angel, and Blondie, well, who's always presented in religious paintings as being blonde? The good and bad references seem obvious, but why is Tuco identified as ugly? What does ugly mean in this context? Eli Wallach's certainly no oil painting, but what I'm guessing it refers to is that Tuco, like all mankind, is living in original sin; he's made in God's image, but is marred, made ugly, by orginal sin. Sergio Leone pretty much annouces what he's up to off the top with freeze frames on each character that are accompanied by a caption identifying them as good, bad or ugly. Once he's done this then you know this isn't going to be your average western.

Angel Eyes' satanic character is made explicit early in the film when, after killing two people who've each hired him to kill the other, he remarks to the last victim that when he's paid he always sees a job through to the end. According to folklore one must never do a deal with the Devil because he'll always find a way to turn the tables on you, and that's exactly what we see happen when we first meet Angel Eyes.

Blondie's credentials as Christ are even more apparent. In fact, at one point Angel Eyes refers to him as Tuco's guardian angel, and, just on cue, the sound of a heavenly choir rises in the background. When Tuco takes the injured Blondie to a monastery/hospital the room he's put in conveniently has a painting of the cruxifiction just outside it, which Tuco prays in front of for a brief moment. Blondie's holiness becomes more explicit once the action moves to the Civil War battle by the river. Blondie is appalled by the loss of men and tells the dying commanding officer (to whom he administers a kind of last rites by giving him a bottle of booze) to expect "good news" soon. He and Tuco blow up the bridge and thus end the battle. Blondie's Christ-like nature becomes explicit shortly after he and Tuco cross the river. Blondie goes into a ruined church and comforts a dying soldier by giving him a cigarillo and his coat. The way this scene is filmed suggests that this isn't just an act of random kindness, this is to be taken as an act of divine mercy.

Tuco, despite acting in a decidedly unholy way, is quick to use religious imagery. He crosses himself virtually every time he comes across a dead body, and he tells Blondie that when he, Tuco, is hanging at the end of a rope he can feel the Devil "biting his ass." In one of the film's key moments, Tuco is about to hang Blondie in revenge for having abandoned him in the desert. The sound of artillery is rumbling in the background and Tuco comments that there was also thunder heard when Judas hanged himself. Tuco's split nature is shown during a brilliant scene with his brother Pablo, a priest, at the monastery. Tuco greets his brother with warmth, but his brother gives him a very un-Christian cold shoulder. In the same scene Tuco lets his brother know that his choice of a life of crime was not his first choice, and that Pablo's decision to become a priest was a form of cowardice. The scene leaves us knowing that Tuco is, to a degree, morally conflicted.

The fight for Tuco's soul first becomes obvious in the scam Blondie and he run. Blondie turns Tuco in for the reward money and then shoots away the rope when Tuco's about to be hung. Each time Tuco is about to face death a list of his crimes is read out by the local sherriff. It's as though he's facing a roll call of his sins, or, because he's allowed himself to be put in this position, he's confessing his sins. And after each confession he's granted forgiveness by Blondie/Christ who shoots the rope. Blondie ends the relationship, and on a symbolic level it's because he thinks Tuco has received a moral lesson about his life of crime.

The final shootout in the cemetery brings all the religious themes to a head. To begin with we have the gold buried in a grave, a clear warning that worldly wealth equals death. Angel Eyes is killed by Blondie and slides into an open grave. Not content with having killed Angel Eyes, Blondie then shoots his fallen hat and gun into the grave. It looks very much as though Angel Eyes is being cast back down to Hell. Blondie then makes Tuco put a rope around his own neck and stand on a cross marking a grave. Blondie then rides off. Tuco is left perched precariously on a cross, staring down at bags of gold lying on the ground. The message seems obvious: as long as Tuco stays on the Holy Cross he stays alive; if he leaves the cross for the gold, for worldliness, he dies, and not just in this world. The juxtaposition of shots showing Tuco's desperation to stay on the cross and his view of the gold bags couldn't make this any clearer. After Blondie's judged that Tuco has absorbed yet another lesson on the error of his ways, he emerges from hiding and shoots away the rope. Tuco lands directly on the gold and then we get a freeze frame in which each of the three characters is once again identified as good, bad and ugly. Leone certainly knew how to drive a point home.

It's not as though Leone didn't mix symbolism into his other spaghetti westerns. In A Fistful of Dollars the family that's been split apart by Ramon is clearly meant to be the Holy Family. Leone also throws in some mythological elements when he has Joe, Clint Eastwood's character, hidden in a coffin and carried in a wagon driven by a Charon-like figure (a coffin maker) to the Underworld (an abandoned mine shaft). There he finds safety and forges a magical shield (an iron breastplate), which he wears when he returns to the land of the living. Like any god his arrival on Earth is announced with thunder and lightning (several sticks of dynamite), and Ramon is defeated because his hero-like ability to hit a man's heart with every rifle shot can't beat Joe's magical shield.

I don't think Leone meant for any of the religious or mythological references in his westerns to be taken too seriously. He used these themes and symbols to give his stories a subliminal resonance and weight. Without these elements his films would be more stylish versions of standard American westerns. One proof of this is Once Upon a Time in the West, which feels less substantial than Leone's other westerns because it omits religious and mythological motifs. Instead we get a rather muddy plot that contains some anti-capitalist rhetoric and not much else. The anti-capitalist theme was a common element in a lot of Italian films at the time, and I'd guess that Bernardo Bertolucci's involvement in the script probably had a lot to do with that.

I may be deluded or off-base with some of my arguments about the religious content of GBU, but give it another watch and see if my thesis doesn't hold up. The two clips below make up the final shootout from the film and I think it proves my point(s). The second clip has bonus Hebrew sub-titles! Here endeth the lesson.

Email ThisBlogThis!Share to TwitterShare to FacebookShare to Pinterest
Labels: A Fistful of Dollars, Bernardo Bertolucci, Clint Eastwood, Once Upon a Time in the West, Sergio Leone, The Good the Bad and the Ugly

An interesting and convincing analysis.

You might want to read the "Sergio Leone: Catholic filmmaker?" chapter of Robert Cumbow's book on his films if you haven't done so already.

I always find myself in two minds when having to choose between The Good, The Bad and the Ugly and Once Upon a Time in the West: My head says the latter, because it's a more direct engagement with the Hollywood Western. My heart says the former, because it's a film that sets its own rules (what are good/bad/ugly; a narrative that meanders and takes a while to involve the two main characters in the central treasure hunt; the treatment of framing etc).

K.H.,
I haven't read Cumbow, but I will now. I've always felt Once Upon a Time, unlike Leone's previous westerns, lacked a certain rude playfulness. It also doesn't help that his casting was a bit off. Fonda was great, but Bronson is just too stone-faced, and Jason Robards in a western?

Very good interpretation. Now I have a better appreciation of this wonderful film.

As far as I'm concerned, he's more of an acrylic painting.

Nice work! A few more extrapolations... the final shoot out - the "unknown name" is needed to gain the treasure and is written by the Christ (Good/God) character (who is the only one who knows it) on a stone which is then placed in the center of the circle. The "civil war" graves surround the circle with 4 entrances, which is the symbol of the earth, where this final duel plays out. Tuco (man) thinks he can chose who he will shoot and thinks he can save himself but actually doesn't have a literal shot. The name on the stone is Arch Stanton, strangely similar to Archangel Satan, but the treasure isn't actually in that grave but the grave next to it marked "unknown". Had a lot of these random, quite possibly unfounded, thoughts after watching GBU and thankful that you'd thought/wrote out yours. Peace!