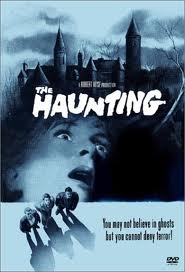 Ever since Halloween (1978) the majority of horror movies have been all about the bloodletting. Nothing wrong with that, but some variety is nice. Variety arrived in 1999 with The Blair Witch Project, which counterpunched its way to huge success by showing nothing: no blood, no weapons, no hooded/cowled/goalie mask-wearing maniacs lurching around. Audiences were scared silly by imagining what was lurking just off-camera.

In 1963 The Haunting, based on a novel by Shirley Jackson called The Haunting of Hill House, accomplished the same feat. It had all the accoutrements of the classic supernatural horror story, including a gloomy, cursed mansion; an easily terrified female lead; and even a housekeeper given to dire warnings about staying in the mansion after dark. Beyond those elements The Haunting was a groundbreaker in a number of ways. One of the non-spooky aspects that's unusual is that the character of Theodora, played by Claire Bloom, is clearly a lesbian. This isn't stated directly, but it's very strongly inferred. What makes it more unusual is that she isn't punished in some way for her sexuality, nor is she required to be a heroine in order to compensate for being gay. Minority characters in 1960s films usually had to be extra noble or die, or sometimes both, as a way of making straight audiences comfortable. And Theodora isn't even made to look butch; her clothes are by Mary Quant!

The Haunting was equally innovative on the other side of the camera. Some of the exterior shots were done with a special high-contrast film stock that gives Hill House the look of a steel engraving and emphasizes its crypt-like design. The camerawork is also pretty bold, with an unpredictable and unsettling mixture of wide angle shots, oddly-angled scenes, and eccentric camera moves. Watching this film also makes you realize that ghost stories should always be filmed in black and white. Special mention should go to the sound of the film, which features one of the first uses of electronic sound effects.

The most startling thing about this film is how scary it manages to be without showing anything. The director, Robert Wise (yes, he's the guy who did The Sound of Music), uses sound effects, lighting, reaction shots, and one very bendy door to create horror and tension. Proof that this is very nearly a miracle of direction and imagination is that it's impossible to think of another film that accomplished this until Blair Witch. Ironically, Hollywood remade The Haunting in 1999, the same year as Blair Witch, with Liam Neeson. The remake went nuts on CG ghouls and so on, and it was a critical dud. Of course, how could any supernatural entity be scarier than Liam?

The actors are uniformly good, with Julie Harris very effective as the mousy woman who finds that Hill House has a special interst in her. Richard Johnson grounds the film as the sensible, but open-minded scientist investigating the paranormal, and Russ Tamblyn as the goofy guy is, well, goofy. Perhaps a little too much so. Claire Bloom is superb as Theodora; just watch her subtle facial reactions to what other characters say and do. The Haunting is well worth watching as it doesn't feel dated and it still packs a scary punch. And for another film that scares without showing much of anything, check out the superb Lake Mungo; my review's here.
Posted by Cary Watson at 11:45 PM

An excellent review that makes me want to see both The Haunting and Blair Witch again.